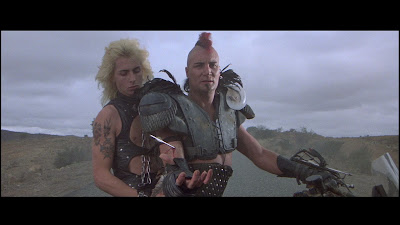 While the world almost certainly isn't coming to an end in two days, it certainly seems as though we're edging closer to it with every passing moment, especially in light of recent events.

There is no denying that man is a violent animal, who all too easily allows the reptilian brain to take over, for all sorts of reasons. Truthfully, people are born monsters. Tiny, squalling, red-faced balls of Id, human babies don't care about anything but their own needs. And that's as it should be. But Homo-sapiens' larger brain eventually allows us to control those urges and to put others' needs ahead of our own (though 'self' is always first and foremost when it comes down to it). We learn compassion and empathy; manners and respect; the difference between right and wrong. We can apply everything we've ever learned about what it means to be a good person as much as we want, but there will always be that lizard in the back of our skulls, ready to pounce at the oddest of provocations.

"Road Rage" has long been a term here in the U.S. though it has proven to be not just an American problem. We've all seen plenty of those Russian traffic videos. And now it seems that the folks from Oz have caught on, as evidenced by the video I am about to share with you.

Australian Tabloid News program "Today Tonight" (via) brings us this story of of an Australian road rage victim who was terrorized by a madman, but caught the whole thing on video. The next 8 minutes of footage are among the most frightening I've ever seen:

Yikes! So how long do you think it's going to be before that devolves into this:


And don't give me that "Violent movies and TV shows are to blame" BS! They make violent movies and TV shows because it's what people want to see. We're no better than Romans at the Coliseum. We love carnage and mayhem. Rubbernecking at an accident is far more of a traffic maker than the accident itself. Real-life tragedy is exploited for ratings. Meanwhile, 20 children are gone forever and we're still arguing about gun control and mental health? Of course, we can thank The Great Communicator for closing so many mental hospitals in the 1980's, rather than giving them money for the overhauls most of them so desperately needed, thereby forcing so many mentally ill people onto the streets and denying much-needed care for all those to come after. But I digress...

It's that caveman brain... the one we try to suppress with all our might... the one that sometimes gets off its leash and does inexplicably horrific things. It's the lizard brain that reacts to fear. Fear of death; fear of the unknown; fear of people different from themselves. Fear and hatred are learned. And yes, some fears are good - they keep us alive. Others... well, they make us attack and beat down and kill other people. As much as things seem to get better in so many ways, I see things like this and worry that the lizards aren't going anywhere, soon. I also worry that they seem to be gaining speed. I just hope I'm not around to see it all go to hell... because you know it will. If you're reading this in the future, I'm sorry. Some of us tried to fix it...

BTW - If I were writing this piece 20 years ago, it would have been Mel in the picture above. He was so hot in those movies (and more than a few others). Of course, that was before I knew he was an anti-Semitic, homophobic, misogynistic douchebag.

As you can tell, my Holiday Spirit is still fighting to get out...

I think that people in general are just hating other people more. I also think religion has a lot to do with it.

That was amazing! But why was the guy filming his drive? Did I miss that or was it a work SUV?