The Failed Obsession of a 'Grumpy Cat'

I know I just raved about Cirque du Soliel's Iris, but there's some sad news. Cirque announced yesterday on Facebook that Iris will be closing on January 19th, 2013 after almost 500 performances at Hollywood's Dolby Theatre. I'm really glad I got to see it when I did. As far as I know, Iris is the first and only 'permanent' Cirque show to close because "demand has not met projections." In other words: no one was going to see it.

With so many less-expensive distractions in the heart of Hollywood; so many permanent shows in Vegas; so many touring shows and so many copycat competitors, Guy Laliberte's entertainment empire suffers it's first financial failure in the company's history. The night I saw Iris, a co-worker went to the box-office and got a seat for $40.00. It was in one of the upper balconies. I was in the fourth row. My ticket was considerably more. My ticket was also a planned expense and my early Christmas present to myself. It was also worth every penny, though I know that Many folks can't afford to spend on themselves in that way. Luckily, I have no spouse or family to support and can occasionally afford to splurge for a special event.

Cirque has also been posting on Facebook about low ticket prices for its Vegas shows, some of which have been running for almost 20 years. Have they over-saturated their own market or out-priced themselves? I'd say a little of both. Don't get me wrong. If I have the money to do so, I'll continue to attend their shows, though having the money to do so has become an increasingly rare thing. 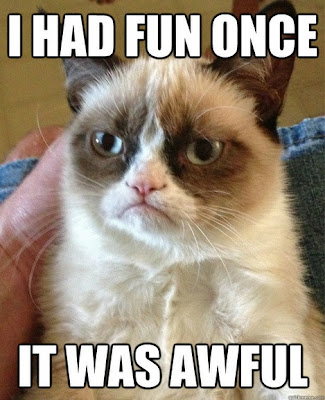 And in completely unrelated nonsense, "Grumpy Cat" has been revealed to be a cat with the misspelled name of 'Tardar Sauce.'  According to the "Today Show" clip embedded below, Tardar Sauce is anything but grumpy. They don't mention Tadar's breed(s), but her unhappy physiognomy is obviously genetic.  'Pet Parents' often ascribe anthropomorphic qualities to their furry companions. We can't seem to help ourselves.

I blame Walt Disney, Chuck Jones, Friz Freling and Hannah and Barbera. No, not really. But I can rightfully say that they all contributed to and profited from how we view animals under certain contexts. Funny here, but disturbing under other circumstances. Do you think about Wilbur from Charlotte's Web or Babe when you eat bacon or pork chops? I certainly don't. (PETA would be having an aneurism over this post, if any of those far-left activists even read this blog. I like meat. Humans are omnivores - get over it!). Anyway, here's the clip:

Visit NBCNews.com for breaking news, world news, and news about the economy

Studies have proven that owning pets lowers blood-pressure; reduces stress and increases longevity. I think I need another cat or dog, soon. Skye is adorable, but he doesn't exactly cuddle up in my lap for a good scratch.