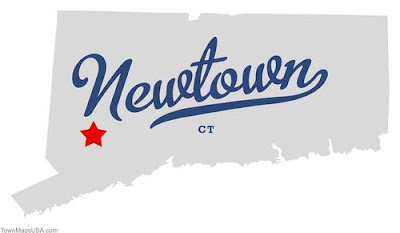 I had to spend some time looking at funny stuff before I could even entertain writing about the events of this morning. It's beyond the pale... incomprehensible; ghastly; horrific; senseless... the list goes on but there truly is no one word to describe the grief, pain and suffering in a town that might as well be Bedford Falls.

Newtown is in southwestern Connecticut, just northeast of Dansbury. Filled with Colonial estates and modern McMansions, Newtown is the epitome of the American Dream, much like the place of the same name where I spend my days. It's not the kind of place where really bad things happen. At least not outside of closed doors. It might as well be called Pleasantville. Until today.

Today a monster killed 20 children and 6 adults, including his mother and himself. I'm calling this obviously insane person "No," because rather than becoming famous for the atrocities he committed this morning, his name should be stricken from the record. What worse fate can anyone suffer than to have any and all acknowledgement of one's existence erased forever? The cold-blooded son-of-a-bitch mowed down 20 children with an automatic weapon. Somehow, No slipped through the cracks of the mental health system and got himself some guns (legally purchased under his mother's license) and finally broke. As if of this writing, no one knows why No did what he did. Matricide is the act of a particularly disturbed individual to begin with. No shot his mother in the face, an exceptionally personal and brutal way to kill. No then went the place of his mother's employment and... well, did what he did.

I know I talked about the discussion my friend James and I had about guns after this summer's shooting in Colorado. That discussion continued among James and several other of my friends on Facebook toady in response to my original post:

"I can't imagine the grief and horror going on in CT right now. I wonder how the NRA lobbyists are going to spin this one? My heart goes out to the victims and their families... so tragic." 26 comments later, my 'Final final word' was: "Go tell the people you love that you love them. There is no warranty on life."

Of course, today's events aren't the only thing that prove our nation is broken. We're still fighting two costly wars; the economy is just coming back, though the much talked-about "fiscal cliff" could drive us back into recession. The extreme right continues to fight progress every step of the way, despite recent election results. The Tea Party may well be the worst thing to happen to American Democracy since the Civil War. Racism and homophobia continue to thrive in what is supposed to be the most advanced nation in the world. Corporations are legally recognized as 'people.' Does that mean if there's a hostile takeover, the aggressor can be charged with murder? Doubt that.

Speaking of the recent elections, I don't remember a more divisive Presidential race in my lifetime. Or an uglier one. Of course, several good things other than the re-election of President Obama happened in November. Four states approved Marriage Equality by voter majority and two states legalized recreational marijuana for personal use. Mr. Obama has said he has "bigger fish to fry" than pursuing antiquated laws left over from the Nixon administration. Too bad that greedy corporate goons drove Hostess out of business. Stoners in Colorado and Washington better learn to like Little Debbie and Tastykake (if they can get them). Oh, did I mention that one of the SCOTUS judges (whose son used to 'minister' to an "Ex-Gay" organization) openly flaunted his homophobia today? And just in case you forgot, Snooki made more money last week than you made all year. Donald Trump pays more for the stylist that does his ridiculous comb-over than you spend on groceries for a week (of course, that stylist may well be responsible for Mr. Trump's obvious brain damage). So many things broken...

How do we repair what's broken? I'm not sure. I have hope, though. I try to take solace in the fact that there truly are FAR more many good people in the world, than bad. Here's a video to prove it:


You should be good because it's the right thing to do, not because someone threatened you with eternal damnation if you didn't. Fear should never be anyone's motivation to do what's right. So, at the risk of repeating myself: Go tell the people you love that you love them, as often as possible. There are no warranties for our often surprisingly fragile lives.

You should also learn to take joy in your life and laugh as often as possible. I couldn't end such a dour downer of a post end on a such a somber note so please enjoy a bit of nonsense: