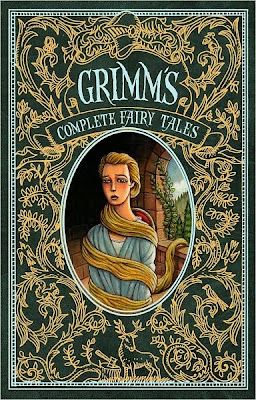 The Brothers Grimm were folklorists and were the first to publish the tales they collected over the years. Without them, Uncle P's sister would not be the Disney Dork she is today. Indeed, Disney might be a completely different evil corporation based only on Hans Christian Andersen; Jules Verne; Helen Mayer; P.L. Travers; Sir Richard Burton; Carlo Collodi; Felix Salton and de Villeneuve. No Snow White or Sleeping Beauty; no Cinderella or Rapunzel. Or any of the recent spate of Fairy Tale movies, including the upcoming Jack the Giant Slayer and Hansel and Gretel Witch Hunters.

And two of television's most popular television shows (ABC's ridiculous "Once Upon a Time" and NBC's equally ridiculous but far superior, "Grimm") wouldn't be enthralling the masses. And while it wasn't exactly a blockbuster, we shouldn't forget innovative experimental director Terry Gilliam's 2005 film The Brothers Grimm, an underrated and under-appreciated fantasy about how the authors might have gained their inspiration. Never mind the perfect casting of Matt Damon; Heath Ledger; Jonathan Pryce; Peter Stormare; Lena Headey and Monica Bellucci -- the connecting of several real Grimm plots may have proven too much for audiences who just didn't get some of the more subtle jokes and obscure references.


Even worse, audiences who only know the Disney versions of the stories and have no idea of the horrific elements in the original stories. Eyes plucked out by birds; heels and toes cut off to fit glass slippers; decapitated horse heads giving advice to a deposed princess; children hacking their families to death in a cannibalistic rampage... The stories may well have been written by Eli Roth or Stephen King.

So here's too 200 years or terrifying fantasies that didn't always have happily-ever-after endings and the movies they've inspired:

And of course, what kind of gay musical theatre icon would I be, if I didn't include at least one number from Into the Woods:

Happily ever after, my butt!