A War of Wit with an Unarmed Opponent. 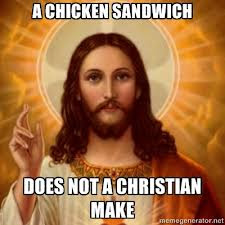 The following is a true story. The names have been changed to protect our privacy.

I thought I'd said all I had to say about this topic, but then today...

I have a Facebook friend - a lovely retired lady (let's call her "Claire") - who happens to be a Christian. Claire is sweet and good-natured and I have never heard her utter an unkind word to anyone. All well and good. When she posts religious things, I don't respond. I post plenty of Humanist things. Claire never responds to those. I always respond when she posts travel pictures and such. But today...

Today, Claire shared a link to a Chick Fil-A online coupon with all of her Facebook friends. I hope she shared it in the best of intentions. I can't imagine otherwise. There is truly not a mean bone in her body. I can't say the same for one of Claire's Christian friends. Uncle P responded to Claire's link and Claire's friend (let's call her "Lamia") responded to me, and so on. Here's how it went:

Uncle P: Lamia, I'd suggest you get informed yourself. They give money to groups which have been officially identified by the Southern Poverty Law Center as Hate Groups.

Her response has nothing to do with what I said, but then this appears:

Claire: From a Friend: [REDACTED] wrote: "Good suggestion. I went to SPLC's website and searched for Ckick-fil-a. Except for one incident where a man attacked someone while carrying a bag from CFA, there was no mention of CFA."

To which I responded:

Uncle P: I never said that the SPLC mentioned Chick Fil-A. Chick Fil-A is not a hate group. They do, however, donate to several groups on the SPLC's list, which can be found by doing a simple search of Chick Fil-A's beneficiaries. Lamia, I feel sorry that you aren't able to think for yourself and are unable make informed decisions based on true morality, rather than dogma. I am finished commenting on this thread. Claire - I'm sorry to have caused such a fuss.

Trying to have a honest, open and cogent conversation (even on line) with a Wingnut Christian is harder than convincing a top to bottom for the first time (I am getting so saucy, these days!). I've come to realize that such people are very, very afraid to die. Hell, we all are. We just don't admit it to ourselves every day. We'd go mad, if we did. See yesterday's post for my view on that. It seems to me that extremely religious people must fear death so much, that they have to believe in stories that promise them an eternal afterlife. They can't appreciate their life for its own sake. They don't appreciate the majesty in the odds of their very existence. They don't see the beauty of the Fibonacci Sequence in everything that exists. The thought that they may only exist once terrifies them. Instead, they should learn to take joy in the fact that they exist in the first place. It makes me sad to think that people still want to live some parts of their lives based on bronze-age mythology.

My sense of morality comes out of knowing how rare and fragile our lives are, and doing everything I can to make the lives of not only the people I know and love, but all people everywhere, at least as good as mine. That's what should matter. I can't imagine anything more immoral than a person or corporation who gives money to any organization which actively works to hurt people. How is that 'Christian' in any sense of the word (at least as I was raised to understand it)? I wanted to tell Lamia that she should sell her daughter into slavery and she'd better hope she never let a shrimp pass through her lips, but thought better of it. She wouldn't understand it, I'm sure. And I wasn't about to attack her punctuation and grammar, as bad as they are. I figured I'd let the Grammar Nazi's do it here. Have it it all you GNs!

And Lamia - since you apparently still believe in magic, here's something that will undoubtedly have you accusing the guy of being a witch:

Just so you know, Yann Frisch is Uncle P's newest obsession, even though everything I've found on YouTube seems to be variations on the same routine. It's still pretty impressive.

Actually I think getting a top to bottom is easy but who'd want that? It's getting a bottom to top that's near impossible. Not that I'm talking from experience. :)

No, that's not all that I got from your post. I love how so many people can look in a mirror and see not themselves but a Norman Rockwell version themselves.