Really? Another blog post from a movie geek about gay comics? Please... But let this play out. You know I have my own take on things. And this post is actually more for myself a few other fanboy friends. You all know who you are, Stephen; Aaron; Tom; Murph; Chino, Bill M. If you don't get it or can't identify, don't feel bad. I still love that you check in every now and then. So let's talk about comics, shall we? 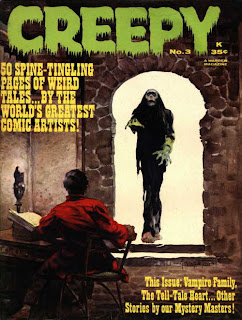 The comics I read as a kid were Creepy, Eerie and Vampirella from Warren Publications. I know you are hardly surprised by this. The great thing about Warren was, they got around the infamous Comics Code by calling their comics "magazines" and publishing them in an 8"x11" format. The children of the original Tales from the Crypt, the Warren horror comics were dark and weird and silly and often had gorgeous covers from artists like Frank Frazetta. My friends and I would by them from Bob's Bookstore at 5 Points. Bob sold new and used books and comics. He also sold illegal half-cover comics, 10 for $1.00. My personal love of superheroes comes more from TV and movies than from the comics. I didn't discover most of their comic-book personae until I'd seen some other medium's version. And while their is plenty to love about the Marvel Universe, I will always prefer DC Characters. I may have mentioned a few times how many times I was Batman for Halloween (not to mention just playing in the yard with a big bath sheet tied around my neck). And don't even talk to me about tearing up at certain points during the good Superman movies. Yes, I really loved just about every Marvel movie in the past few years (Thor being the exception), but the DC characters are more... pained, I guess. Yes, even Superman - Kal-El is an alien, after all. The LGBT community as a whole may identify more with Marvel's X-Men (and I certainly do, to some extent), but DC's tortured souls speak to me differently. Anyway...

Bill M. is also a DC guy. Bill's love of Superman is equal to mine of Batman. Bill and I met this past spring and quickly found out we love many of the same things and have been posting all kinds of Superhero nonsense on each other's Facebook timelines. Many of our friends have caught on and also post similar things to both of us. Today, sweet Stephen in Portland posted a picture of some hand-painted Christmas ornaments with the logos of several superheroes. Well and good, until my friend Aaron asked "What is Cap(tain America) doing with all those DC characters?" I looked at thepicture again. Yup. Batman; Superman; Flash, Green Lantern (all DC) and Captain America (Marvel). "I didn't make them," I replied, "but the thought of Cap and Bats is pretty hot." 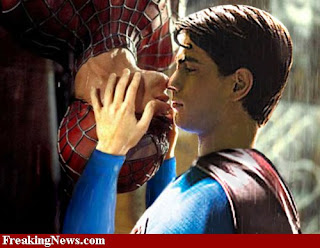 Aaron then linked to the cover for a DC/Marvel crossover with Batman and Captain America joining forces. "No Rule 34" he said. So of course, Uncle P, being the dirty old bear that I am, went looking for Rule 34. And man, is there lots of it!

I'm not sure if that's Brandon or Tom (maybe Tom's head on Brandon's body?) in that composite on the left but it's definitely the work of a gay geek with some mad Photoshop skills and a dirty mind. I personally don't see this particular pairing as very probably in a gay cross-over story. Most of the fan-made gay superhero stuff online is in the form of paintings and drawings (and plenty of 'shopping), usually deliberately done in the style of an established comics artist. Here are a few I found:


Of course this fascination with turning established characters gay is hardly new:


It's obvious that the fans want what the fans want. Give us some more hot gay boys, Hollywood! We've grown up since Brokeback Mountain. Of course it could all explode in our faces. Fan fiction also gave us "Fifty Shades of Gray" {violent shudder of revulsion}. I have lots more to say about this subject, but that's for another post.

I will say that 20 years ago, I wouldn't have written a piece like this (indeed, many of the pieces I've written). LGBT acceptance has grown beyond what I ever thought I'd see in my lifetime, and the comics were at the forefront of inclusion, long before many people even noticed. Both Marvel and DC have LGBT characters driving major story lines. Even the wholesome Archie Comics introduced Kevin Keller, an out and proud Military Officer, who married his African American partner Clay Walker this past January. Progress is slow, until it happens all at once. We're getting there.

Of course, there's nothing wrong in finding the humor in all it: