A: Not Just the Longest River in Africa.

Q: What is Denial?

Worst and most overused pun of the last 25 years, but I couldn't help myself, and you'll see why in a bit.

And forgive me if it seems that I've been saving up all my gayest stuff for the end of the year, but it just so happens that a lot of gay things have been happening lately. Happily, for the most part, that's a very good thing. Marriage Equality took amazing strides this year, especially after President Obama became the first sitting POTUS to publicly endorse it. There are more elected openly LGBT public servants than in U.S. history. I am actually proud to have lived through three distinct civil rights movements: Ethnic, Gender and Sexual Identity.

But there is still lots of work to be done. Starting with ourselves. This post is about two very different coming out stories. One sort of amusing and the other in need of advice. 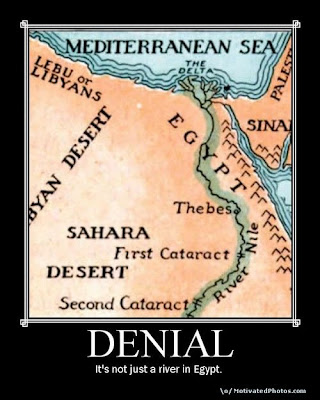 I apologize to my fans for waiting so long to make this announcement. You've all been so patient watching me expand my horizons and explore my sexuality onscreen, and while I've been hesitating to say this so long -- because of all the haters -- I feel the need to be honest with you. I am a proud, gay American.


I won't deny having seen Cummings (nee: Kevin Kristopher Lengyel) 'perform.' It was the leadenest, dead-eyed sex scene I've ever witnessed (and I've seen the 160-minute version of Caligula). This isn't about my denial, anyway. It is, however, about Mr. Lengyel's. I've often thought there was more to the "GFP" industry than money. I don't care how much I offer any straight man I know, not a single one of them would have sex with another dude. There's no shame in coming out and labeling one's sexuality as "Bi." Why be coy about it? And really - "When life gives you lemons... ?" Being gay is like getting a lemon? Screw you, you self-loathing low-life!

Of course, I can think of one reason to act like such a douche: The gay blogosphere was all over this story today. As the sayings go, "There's no such thing as bad publicity" and "The only thing worse than being talked about, is not being talked about."* Lengyel is not at all my type (thankfully - ick!). Truth is, I don't have just one type but I know when someone isn't one of them. Of course, when his peen turns black and falls off, it won't matter who he wants to boink.

Second and more serious is the clip embedded below, in which a 20 year-old gay man asks for some very specific advice on coming out to a very specific person. Watch it first, and I'll let you know my thoughts and advice:


First of all, I have several friends who went through this much later in life, and they will all agree it is much better for this young man to end it now.

Secondly, Dude - she already knows. Your wife is in even deeper denial than you have been and has been so even longer than you. You are both young enough to recover from this unfortunate situation relatively unscathed and may very well become best friends again. I have witnessed this particular phenomenon in person, more than a few times.

Third: It really is getting better. Living true to yourself is the best gift you can give yourself and while the emotional pain both of you may be experiencing now seems like the worse thing you've ever felt, it is nothing compared to the pain of regretting not living the lives you both deserve. The truth will always set you free. Trust me on this one, my young friend. Take a deep breath; put on your big-boy pants; own yourself and everything your are; tell her the truth and move on with the life you were meant to have.