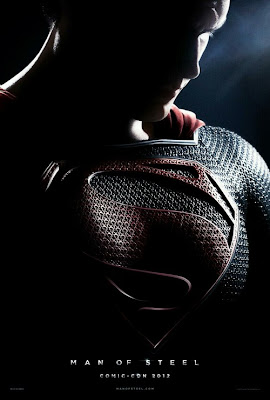 You have probably already seen at least one or two of the four full-length trailers for upcoming films which were released online today. I am on the fence about all of them. Two of them are potential franchise rebooters. One of them is from an original story from my second-to-least favorite (and most frustrating) modern director and the other is from the director of TRON: Legacy, written by and based on the graphic novel by the director. Of course, the downside of that good news is the star. But first things, first.

Return to us now, to those thrilling days of yester-year! A staple of radio and weekly film serials since the 1930's, The Lone Ranger was popular with Western-loving audiences right through the 1950's. Played in serials, films and on TV for many years by Clayton Moore, the Ranger's last incarnation was the miserable 1981 The Legend of the Lone Ranger starring Clinton Spilsbury in the title role and Michael Horse as Tonto. You might not remember Spilsbury because he never made another movie, ever. Horse has had an almost-make-a-living career ever since. Here's the trailer for that major misstep from Universal:


Today, Disney released the first full trailer for their reboot, starring hottie Armie Hammer as John Reid/The Lone Ranger and Johnny Depp as Tonto. I hate this idea, even more than I hated the idea for Pirates of the Caribbean: The Curse of the Black Pearl. Of course, writer/director Gore Verbinski proved that at least one Pirates movie was a good idea. Still, Depp has begun to annoy me. As a 'star' who wants to keep a low profile, he sure does work a lot. Recently, for the same two directors, over and over again. This time, he has a dead crow on his head and does his best to create a non-stereotypical Native American accent:


Just once, I would love to see Depp in a film by almost anyone but Burton or Verbinski, playing an everyday Joe who doesn't have anything extraordinary happen to him. Hammer apparently has big feet, and we all know what that means... He's also rather gorgeous when cleaned up. While there is no trace of the William Tell Overture in the trailer, Jack White's score is sure to include it in some way.

Then there is Man of Steel, director Zack Snyder's reboot of Warner's and DC's Superman franchise, starring Henry Cavil as Kal-El/Clark Kent/Superman. Along for the ride are Micheal Shannon; Amy Adams; Russell Crowe; Kevin Costner; Diane Lane: Laurence Fishburne; Christopher Meloni and Tamoh Penikett. Snyder's Watchmen was pretty good, though his last movie Sucker Punch was downright awful. But with producer Christopher Nolan and writer David S. Goyer on board, Man of Steel  could be just what the franchise needed, despite the silly new costume design and the lack of Brandon Routh:

Still hot but wacky Scientologist Tom Cruise returns to Sci-Fi in writer/director Joseph Kosinski's (who also wrote the graphic novel in which this film based) post-apocalyptic thriller Oblivion. Cruise plays a court-martialed soldier sentenced to repair droids on a decimated Earth, only to discover the planet isn't as deserted as once thought.


Finally, there's M. Night Shama --- no, I'm not going to do the joke name tonight. Every time I thought Shyamalon was about to redeem himself, he's failed me. Returning to Sci-Fi for the first time since Signs (the second and last film of his I liked), M Knight's latest sees Will Smith and son Jaden marooned on a future version of Earth which was abandoned by humans 1000 years earlier:


Oooh! Baboons and the return of Ice Age saber-tooths! How (not) exciting! Given Smith's record of late, I'll probably wait until this one's on Showtime.

I hope 2013 has better fare in store than most of these movies. What do you think? What movies are you looking to seeing in the coming year?