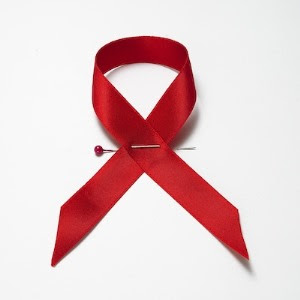 Over the years, I've lost more than a few friends and acquaintances to AIDS. The first person I lost was an ex, Scott. Scott contracted HIV several years after we had broken up and he called me after his family had basically abandoned him. The conversation started with an apology for cheating on me and ended with his confession of being HIV positive. This was around 1985. I immediately went and got my first test. Relieved by a negative result, but horrified by Scott's situation, I started visiting him, first at home and later in the hospital.

The nurses and doctors treating him wore surgical masks and gloves for even routine exams. They tried to make me wear them when I visited but I refused. My last few visits with Scott were bad... He didn't recognize me; he was wracked with pain and was a frail shell of the man I knew. On my very last visit, he was alert and smiling and knew me. He was even making jokes about dying. I laughed along with him and held his hand. I never saw him again. When I went back the next week, I was told he was gone and was given no further information. I tried calling his father, but got nowhere. Eventually, his sister called to tell me that he had died and I shouldn't try to contact the family again. I don't even know where, or even if, he is buried. Scott is why I so readily joined the JTMF when asked to participate. No one deserves to suffer like that.

AIDS is still a world-wide disease. Millions are infected and hundreds of thousands suffer and die each year. AIDS never really was a gay disease, though there are still those who believe it is. In Africa, over 90% of those infected are straight. In the U.S., people of color have the highest rate of infection. HIV is an insidious virus which mutates easily and resists all efforts to eradicate it.Yes, new drugs and continued research have helped. But there is more to be done.

Take a moment to remember those who have been lost, and share a few dollars to keep from losing more. amfAR, The Hyacinth Foundation and JTMF (among many others) are dedicated to eradicating HIV/AIDS. 30 years on and people are still being infected, but we can beat it.