This is really a two part post. I invite you take both "tests."

The first part is about teen angst and the need to fit in. I first saw this on BoingBoing, but then tracked it down to its original post, here. 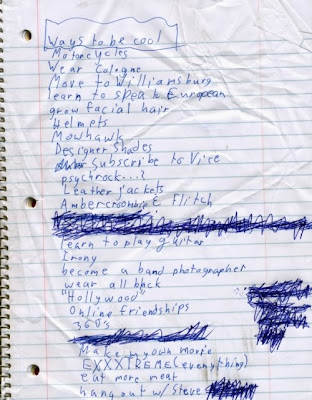 First, I read it, laughed at the clumsy spelling and the things this poor kid thinks are cool ("Abercroombie and Flitch" and hanging out "w/Steve"). But then I got to thinking about what would make a kid want to write such a list. Is he considered "uncool" by his peers? Or maybe he thinks he isn't cool.
When I was a teenager, I was torn. My friends were the smart kids, the artsy kids and the kids on the fringe. I was in the chorus and the Drama Club and took advanced English and Biology classes. I was well known, fairly popular and had a relatively good four years. But I secretly wanted to be one of the rebel kids, smoking dope and hanging out in places I had no business hanging out - and I did those things too, hiding those behaviors from the rest of my friends. I had a girlfriend, but was sneaking around having sex with three other boys (a hot tech-school loser; a fellow thespian and a member of the JV football team). The duality was almost more than I could bear. So, while I may laugh at this list of "Ways to be Cool," I also have to ask myself - and you - what did you think it took to be cool when you were in high school?
And speaking of duality, the next test comes via my fellow blogger, Stephen Rader, a comics fan and Watchmen enthusiast. 6 Minutes to Midnight is an interactive site where Watchmen's Rorschach (Jackie Earle Haley) administers you a Rorschach test, telling you that you are a "pervert" or that "the light's on, but the refrigerator is empty" if you answer incorrectly. It's fun to play (and a bit hard - you may have to stretch your imagination quite a bit to get all six answers), but you end up with bonus footage from the movie for your troubles. And it's funny hearing Haley taunt you and call you names.
By the way, I'll be at the movies Friday night, so don't bother calling me. Yes, I am cool. 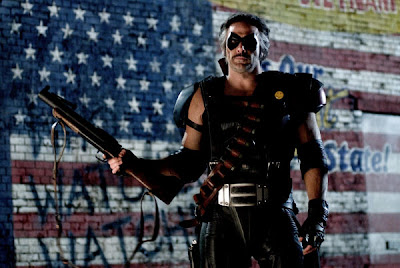