This post started out as something else, altogether. I came across a clip on my daily visit to BoingBoing. It was of obscure, androgynous punk rocker Jobriath appearing on a show hosted by Gladys Knight. Jobriath was apparently the inspiration for the Jonathan Rhys Meyers character in the film Velvet Goldmine. The song is "I'maman."

Weird & 70's Bowie-esque (yes, I just made up a new term). Certainly interesting enough for me to do a post on androgyny in music and film. Then, while doing research for that post (yes, I actually do research - I have to know what the hell I'm talking about, though that doesn't seem to stop some bloggers - Hello? Bai Ling, anyone?), I came across something which sent me in a completely different direction ("Ooh, look! A bunny!"). And that direction was early 80's performance artist, Klaus Nomi. 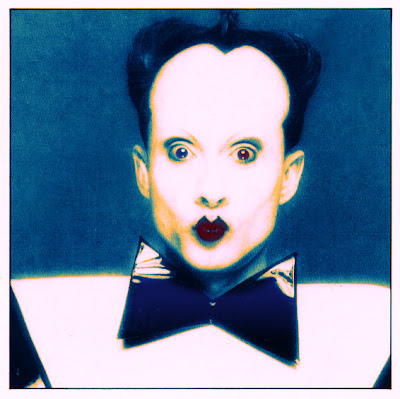 I first saw Klaus in 1979 when he appeared as a back-up singer/performer for David Bowie on "Saturday Night Live. " Classically trained in opera with an exceptional vocal range and a completely, mad and original performance style, the German-born singer soon had all of Lower-Manhattan clamoring to be at one of his shows. He worked with drag impresario Robert Ludlam at Ludlam's infamous Ridiculous Theatre and then went on to create his own shows where he would often perform songs which punned on his name (including 'The Nomi Song'), in a bizarre, robotic style that caused one critic to coin a phrase about him: "He has come from Outer Space to save the Human race."

I was very lucky to have seen Klaus perform live in New York in 1981. It was a strange time - we all wore strange clothes and dyed out hair blue (I was a theatre major with lots of art major friends and it was the early 80's - leave me alone) and we hated pop music and disco and craved the avant garde. It may have been CBGB or some other iconic downtown club. It was hot and crowded and I was excited to be part of something that was so uniquely New York. Klaus came out and did his set and the crowd went wild before and after each song. I thought I had seen the future of music. Here is a clip of Klaus singing 'Total Eclipse,' live:


And here's fan-made tribute video, featuring Klaus' cover of a song you probably know better - the Leslie Gore hit, 'You Don't Own Me:'

Sadly, Klaus succumbed to AIDS-related disease in 1983. He is considered by many to be the first celebrity to die of AIDS, even though he was relatively obscure in most of the world (celebrated mostly in Manhattan and France - yep, he's the Jerry Lewis of "popera."). His distinctive face and makeup have become rather iconic. Even if you never saw Klaus perform, you've seen his image somewhere. Towards the end, he was writing his own opera and took to dressing as its main character, a sort of Elizabethan clown: 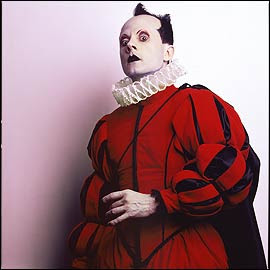 There's a terrific documentary about Klaus, The Nomi Song, which I happened to catch on Logo a few months ago. Nomi's "alien' persona is on full display, though interviews with his contemporaries like actress/singer Ann Magnuson (Making Mr. Right; "Anything But Love") paint a picture of a soft-spoken, though brilliant auteur.

Had he lived, Klaus could have been a major voice in music, art and film today. His 1983 death at the unfairly young age of 39, left the world tragically bereft of yet another original artistic voice. If you have some time and want to know more about the early 80's performing arts scene, Google Mr. Nomi. You won't be disappointed.

PS - That Androgyny post will be coming soon...
Posted by Prospero at 10:39 PM

Cool that you saw Klaus live too! I also had the privilege!

You can read my story about Klaus Nomi here...