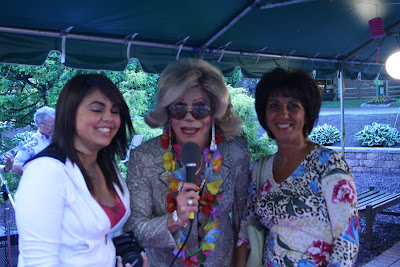 You can also join the JTMF Group on Facebook. We want to get the word out and fill seats, so we may may ask you to share information from time to time. You'll really only hear from us in the spring. You can also access exclusive photos from our shows and events. Above, you can see "Joan Rivers" interviewing two guests at our Fifth Anniversary Red-Carpet Gala in 2007, which featured Charles Busch's hilarious play Psycho Beach Party and a Luau-themed reception. Silent auction items that year included donations from Robin Williams, Carol Burnett and the cast of ABC's "Desperate Housewives." Oh, we know how to throw a party, honey!
By the way... I must make a correction. In a previous post, I mentioned that the MCCC/JTMF "Pride Night" at Angels in America benefited the JTMF. I should have said that the event benefits the James Tolin Memorial Scholarship at MCCC, which was established by the JTMF. I apologize for any confusion.
More, anon.
Prospero
Posted by Prospero at 9:14 PM