Bears and Cubs and Movies, Oh My!

Enough with the political correctness (or lack thereof) in recent movies. On to the hot guys who will soon be gracing our cineplexes. Superheroes, video games and fantasies seem to the films du jour, and there are two in particular I want to discuss tonight.
First, on May 1st, comes X-Men Origins: Wolverine, starring Aussie hottie Hugh Jackman, seen here in all his glorious hotness in a shot from Baz Luhrman's Australia:

My goodness, the man just gets finer and finer! Reprising his role from the three previous X-Men movies, Jackman plays Logan/Wolverine, a mutant with regenerative powers who is apparently immortal and suffering from the pain of losing everyone he's ever loved. Along comes William Stryker (30 Days of Night's evil vampire leader, Danny Huston), who offers Logan a chance at redemption. Replacing Logan's bones with an experimental metal called "Atomantium," Stryker transforms Logan into Wolverine, an indestructible mutant weapon. Oscar-winning director Gavin Hood (Tsotsi) is at the helm and there is plenty of delicious manflesh on display in the forms of Ryan Reynolds (Deadpool); Liev Schrieber (Sabretooth); Daniel Henny (Agent Zero) and LOTR/"Lost" star Dominic Monaghan (Beak). As a lover of Bryan Singer's first two X-Men movies (and an almost-hater of Brett Ratner's third), I wasn't exactly sold on this one until I saw the trailer prior to seeing Watchmen last week:

Next, I'd like to talk about (read: drool over) a movie scheduled for next year, Disney's version of the video game Prince of Persia, starring Jake "Oh God, those eyes!" Gyllenhaal. Much has been made of Gyllenhaal's physique in this film, with many folks claiming he must have used steroids to bulk up. Jake (who you must know starred as a gay shepherd in Brokeback Mountain) and his handlers maintain he did no such thing. To me, it isn't so much about his body (which seems mighty fine), but his hair (atrocious) and the enormous package he seems to be sporting in this already much-seen publicity photo from the film: 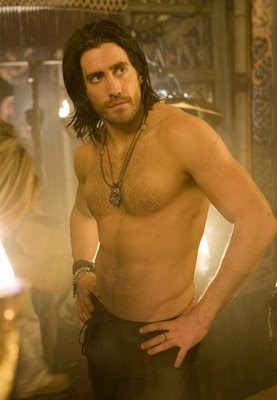 Personally, I've been in lust with Mr. G. since Donnie Darko, Richard Linklatter's enigmatic time travel movie. It's always been about those soulful eyes, though it's obvious here, he has much more to offer. Why does Reese Witherspoon get to have all the fun? Oh, well. It's nice to fantasize every now and then, isn't it? And I suppose that's why we go to the movies in the first place. What is it that Hannibal Lecter says? "It starts with coveting." Well, I'll be the first one to admit that I covet both Jake and Hugh. What red-blooded American gay boy doesn't?

for me it was october sky

I really first noticed his eyes in the deplorable "Bubble Boy." It wasn't until "Darko" that I realized there was actually talent behind them.

not so much a fan of jake, but frankly wolverine i'm salivating over b/c of some of the man candy you mentioned, but also b/c of THIS boy....http://www.imdb.com/name/nm2018237/ who will play Remy LeBeau / Gambit -- i love all his girl-izing in Friday Night Lights every week. i need to go to austin, tx b/c it's a great music town but also b/c the show is filmed there!