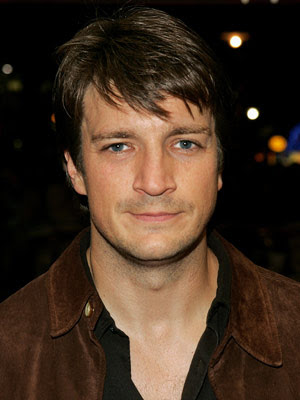 I rarely watch Prime-Time TV in real-time. Instead, I DVR the shows I love and watch them later, zapping (as many of you do) through the commercials. And that is the reason for this review taking place well-after the first air-date of ABC's newest dramedy, "Castle."
I wanted to see it because I just adore it's star, Nathan Fillion. He's not only good-looking, but very talented. I first noticed him on the lamentable (and lamentably titled) ABC sitcom "Two Guys, a Girl and a Pizza Place." He then appeared in Joss Whedon's FOX series "Buffy the Vampire Slayer" and "Firefly. In 2006, he starred as a small-town sheriff in James Gunn's hilarious sci-fi comedy Slither and then again in Serenity, the big-screen movie spun off from "Firefly." In 2007 he starred in FOX's quickly-cancelled "Drive." Next up, came a short stint as an OBGYN on "Desperate Housewives." The poor guy couldn't get a break. The studios obviously loved him, but couldn't find a suitable property for him. During last year's writer's strike, he appeared as the hero in Whedon's on-line musical hit, "Dr. Horrible's Sing-Along Blog," where he proved he could actually sing, as well as act.
Here's the trailer for Slither (which also features Jenna Fischer, Pam from "The Office"):
Now, finally, it seems Fillion may have a hit on his hands. On "Castle" he stars as Richard "Rick" Castle, a mystery writer with a penchant for the macabre (think Stephen King meets James Patterson). When two real-life murders match murders detailed in his novels, Castle is pulled in to consult on the investigation. Lead Detective Kate Beckett (Stana Katic - Quantum of Solace; The Spirit) is a fan of Castle's, but finds his often childish ways irritating to no end. Castle lives with his daughter, Alexis (Molly C. Quinn) and his mother, Martha (the always delightful Susan Sullivan) a former actress endowed with "gray-dar" (which may well be my favorite new phrase). Castle has the NYC mayor on speed-dial, plays poker with any number or real-life mystery writers and takes endless pleasure in signing autographs on the chests of his female fans. He's also an analytical genius who can out-think even the smartest of NYPD detectives. By the end of the first episode, Castle has not only helped to solve the crime, but chosen Kate as the model for his newest recurring character, getting permission from said mayor to accompany her on cases in the name of "research."
The writing on "Castle" is sharp and funny and the chemistry between Fillion and Katic is undeniable. My mother (a bona-fide mystery fanatic) told me she just loves the show and I have to admit, it's one of the best mid-season replacements in several years. I hope "Castle" is a hit, not only because I love Fillion, but because it's such a departure from the procedural crime shows like "C.S.I." Plus, it harkens back to the glory days of David and Maddie on "Moonlighting," one of the best detective shows ever. Sexy, funny and exciting, "Castle" may well be my favorite new show (after "Fringe," of course).
For those of you completely unfamiliar with Mr. Fillion's works, I offer up this clip from James Gunn's PG PORN: "Nailing Your Wife." Just hilarious.
PG PORN: Nailing Your Wife Girls SPIKE.com
More, anon.
Prospero
Posted by Prospero at 10:57 PM

mmm...bondage, my safe word is apple.

He's perfectly sexy in this roll.