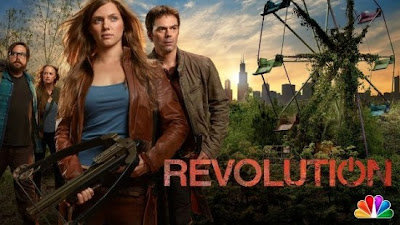 I don't usually review TV shows until I've seen at least two episodes but the pilot episode of J.J. Abrams' new NBC show "Revolution" has proven to be the exception to my rule.
The premise starts in the contemporary world. Two young children are watching 'Bugs Bunny' cartoons while their mother ("Lost" and "V" alum Elizabeth Mitchell) is on her iPhone with her own mother when her husband Ben (ubiquitous guest star Tim Guinee) rushes in and tells her to fill the sinks and tubs. "It's happening, isn't it?" she asks. Ben calls his brother while downloading a file onto a flash drive. Brother Miles (Billy Burke - most recently seen on "The Closer" and "Rizzoli and Isles") is in the car with a buddy when he gets the call. Soon, reception is lost; lights and engines are failing and planes are falling from the sky.
Flash forward 15 years and Ben and family are living in what appears to be an agrarian suburb, growing their own food and raising livestock in a gated cul-de-sac. His now young adult children are adept bowmen and his new companion is the "Village Doctor." When the Militia arrives and demands that  Ben come with them, all hell breaks loose: Ben is shot and his son Danny is taken. Before he dies, Ben implores his daughter Charlie to seek out Uncle Miles in Chicago, while entrusting the flash drive with best friend, Aaron (Zak Orth).
What follows is a trek through an overgrown Illinois (complete with a vine-infested Wrigley Field) and some excellent swordplay as impetuous daughter Charlie seeks out her uncle while brother Danny escapes the militia to find solace with the mysterious Grace (Maria Howell) who possesses an amulet exactly like the one in which Guinee hid the flash drive, and which apparently provides electricity to both a lamp and a computer which she uses to communicate with an unknown entity,
There's tons more that I haven't covered here, but I must admit that I am very intrigued to find out what is going to happen next. Why did the electricity go out? What's on that flash drive? Why does Grace have power (limited as it may be)? How did Miles' drinking buddy gain control of the local militia and why does he want to capture Miles? Who is the mysterious Nate and why does he help Charlie in a fight against one of his own?
Much like the massively popular "Lost," Abrams and company ask questions to which we may or may not find the answers. Directed by Iron Man's Jon Favreau, the pilot for "Revolution" set up a series of puzzles that may well prove as intriguing as those in "Lost." I hope they don't lose the momentum they set in motion with the pilot. I just know that I'll be tuning in to see where it goes.

Of course, Uncle P and his sister share a mild obsession for abandoned amusement parks; theatres; hospitals;  monuments and cities, so the sets and visuals impart a particular resonance with me.
So far, I give "Revolution" ***1/2 (Three and a Half Stars Out of Four). "Revolution" airs Monday nights on NBC. Check your local listings for air times.
More, anon.
Prospero
Posted by Prospero at 11:26 PM

I couldn't finish Rev. It was very Hunger Gamish in both style and setup. They killed the one actor I wanted to watch (he was on SG1) and the hunks were very CW/Disney Channel hunky. A 14 year old with such severe asthma would not look like that and would have an idea as to protect himself from attacks. They "found" a RV in near perfect condition so close to camp 15 years after the black out??? An did I miss how long it took to actually get to Chicago? It seemed like 2 days at most but they made it seem like it was going to be this major journey.

I'll stick with it for a few more but I'm not optimistic.