Horrors Yet to Come 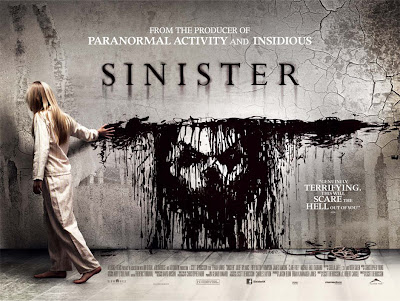 Today is the Autumnal Equinox - the first day of Fall - and it brings with it two of my favorite things: Halloween and Horror Movies. I have no idea why an aging atheist loves Horror Movies so much. I guess it's because I grew up with them. My father loved the old Universal Monsters. One of the first movies I can remember seeing on TV was Tod Browning's atmospheric 1931 version of Dracula, starring Bela Lugosi.

Scary movies are just so much fun! Of course, I get much more out of the plausible, psychotic killer type of movies than I do the supernatural ones. But every now and again, a supernatural thriller like Insidious comes along to provide genuine creeps. It's the whole 'suspension of disbelief' thing, I guess. While watching such a film, I can totally give in to its conceits. Of course, after it's over, I revert to a rational human being who knows the premise is ridiculous and laugh at myself for getting sucked in. There are plenty of Horror Movies coming up this season, and I find myself wanting to see many of them.

First up is writer/director Scott Derrickson's Sinister, with Ethan Hawke as a man who moves his family into a home where five families have been previously murdered, as evidenced by the reels of home movies he finds in the attic.


Gotta love an R-rated Horror Movie! And this one looks particularly disturbing.

Then there's The Bay, a found-footage movie from Good Morning Vietnam and Rain Man director Barry Levinson. The trailer is certainly interesting and I am excited to see what an established "mainstream" director does with a found-footage film:


Yikes! Environmental Horror ranks up there with Psychotic Killer Horror for me.

We're also finally going to get to see The Hole from Mad Max and Gremlins director Joe Dante. Completed in 2009, The Hole has apparently finally found a distributor and is scheduled for release in the U.S. this fall:


The Hole reminds me of both Steve Miner's 1986 Horror Comedy House and a very young Stephen Dorff's 1987 Canadian film debut, The Gate which, if you've never seen it, is a really fun movie that mixes lots of Harryhausen-like stop-motion monsters with both ridiculous Heavy Metal Satanism and Lovecraftian themes - highly recommended.


On the Psychotic Serial Killer end of the spectrum, we can look forward to The Collection from Feast screenwriter Marcus Dunstan. I guess you could think of it as Saw meets The Texas Chainsaw Massacre. You can view the trailer on the movie's IMDb page.


Seriously? Give me the original (or even Marcus Nispel's not completely inept 2003 remake) any day. Of course, both of those films were inspired by the true story of Ed Gein, who was also the inspiration for the grandfather of all slasher movies, Alfred Hitchcock's Psycho. And Psycho just happens to be the subject of one of the movies I most want to see this fall: Hitchcock starring Sir Anthony Hopkins as the mercurial director and Scarlett Johansson as Janet Leigh. There's no trailer available as of now, but I'll be sure to post one as soon there is (no doubt as part of a post dedicated to the movie).

So what movies (Horror, or otherwise) are you looking forward to seeing this fall?

I hope I get to see some of these - I've missed many movies this summer.