40-odd days away from the Presidential election and I can't help but feel more hopeful than ever that the Romney/Ryan ticket is sinking faster than the Titanic.

I'm pretty certain that the majority of my U.S. readers are liberal Democrats who agree that a Republican in the White House will only lead to more poverty, more repression of human rights and more corporate power. It is clear that Mitt Romney doesn't care about the working poor, the elderly, the ill or the LGBT community. Romney only cares about what's good for himself and the 1%. You all know that I'm an avowed Secular Humanist, but I know that nothing Romney stands for is in line with what the Bible says Christ stood for. The message of the New Testament is one of love, compassion and charity. I have no idea what the Book of Mormon says, other than what I've learned from the creators of "South Park" and The Book of Mormon, though it sounds just as insane as Scientology does to anyone with half a brain. Still, if it follows the supposed teachings of Jesus, Romney should throw himself out of the temple; denounce his wealth and set about doing good for his fellow men. I honestly don't see that happening, do you?

I wonder what the average guy thinks? Maybe the ultimate 'average guy,' Homer Simpson can shed some light on the problem.


Honestly, I'd try to kill myself if Flanders was seated next to me on the production line, too.

Uncle P lives in the swing state of Pennsylvania, where the State Supreme Court has just sent the new Voter ID law back to lower courts, deeming it unworthy of their consideration but still likely Unconstitutional. PA does issue free Non-Driver IDs via the Commonwealth's DMV. Of course, one has to be mobile enough to get to a DMV photo center in order to obtain such an ID. This limits those who are handicapped; elderly and/or without adequate transportation from obtaining such an ID. The idea behind these IDs is to limit voter fraud. The reality is that the law limits those unable to obtain such an ID (no matter what the reason) from voting at all. This Repugnican backed law is meant solely to prevent voters who would normally vote for Obama, from doing so. Who is committing Voter Fraud, now? Comedienne Sarah Silverman probably expresses this idea best in the the NSFW video below:


Here's the thing: VOTE! Vote to save our freedom. Vote to save our economy. Vote to keep religion out of politics. Vote to ensure that every American has the same set of rights. Vote for what you know is right. Vote as if your lives depended on it. Because they do.

If you're still not sure who to vote for, read Margaret Atwood's The Handmaid's Tale or George Orwell's 1984 or any other treatise on the tenets of basic human rights. Hell, read the Constitution. It's all right there.

Do you want the country to be ruled by man who believes God lives on the planet Kolob, or a man who believes every citizen has the right to liberty, justice and the pursuit of happiness, regardless of his or her race, religion, sex or orientation? 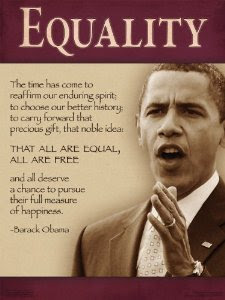 And just to touch on Marriage Equality one more time, I came upon a quote about "Two Spirit" people and I'd like to share it with you.

"Christian leaders stand on our soil and claim: 'gay marriage' has never occurred here. Over 130 tribes in every region of North America performed millions of same-sex marriages for hundreds of years. Their statements are both hateful and ignorant. Your 'homosexual' was our 'Two Spirit' people... and we considered them sacred."

I don't have a name to attach to that quote, but I know from my personal research in my own spiritual quest that this is true. In fact, the word 'homosexual' didn't even exist until the mid-19th Century.

And don't even get me started on the teacher who insisted that the 'homo' in 'homosexual' was rooted in the Latin for 'man,' rather than the Latin for 'same.' If she were alive today, I'd smack her silly.

Rant over, for now. You know I'll be talking about this subject again before November. I hope you'll bear with me through the idiocy of our electoral system.

Prospero
Posted by Prospero at 11:18 PM