Retro Review: 5 For and 5 Against "Mother's Day" 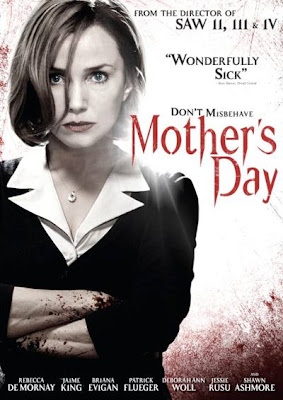 So, I finally got to see the much talked-about 'remake' of Mother's Day from director Darren Lynn Bousman (Repo: The Genetic Opera) and I first have to say that it resembles Charles Kaufman's 1980 Troma slasher as much as The Texas Chainsaw Massacre resembles Psycho. They may share the same source material, but they are two very different films. And I must admit, Bousman's is the more successful of two.

A suburban house party is interrupted when three bank-robbing brothers force their way into the home where they grew up, only to discover that their mother doesn't live there anymore. Brother Johnny (Matt O'Learly) has been shot. Brothers Addley (Warren Kole from USA's "Common Law") and Ike (Patrick Fluegler from "The 4400") call Mother to come get them. When Mother and Sister arrive, all hell breaks loose and the movie becomes a story of survival, torture, desperation and revenge.

It's late and I'm tired, so here's another 5 For/Five Against review, inspired (as always) by my buddy, Sean:

1. Rebecca De Mornay, best known for Risky Business and The Hand that Rocks the Cradle, gives a new career-defining performance as Mother. As chilling as she may have been in Cradle, she is absolutely terrifying as a woman who will go to any lengths to protect her children.

2. Shawn Ashmore (X-Men; X2) is practically perfect as George, the doctor forced to attend to a killer and who has perfect insight into Mother's manipulations (on a side note, his twin brother Aaron can be seen on my favorite steampunk SyFy show, "Warehouse 13").

3. Scott Milam's screenplay transforms Kaufman's characters into real life people, as opposed to the cartoonish villains Kaufman gave us in the original.

4. Warren Kole's obviously insane Addley was the antithesis of the character he plays on "Common Law." Kole proves himself an actor who is not afraid to go where he needs to in order to achieve the performance required. Addley is definitely not a guy you want to meet in a dark alley.

5. Bousman manages to create an intense feeling of claustrophobia in what is probably his most artistically successful film to date. Yes, there are plenty of scenes set outside the house where the main action takes place, but the scenes in the house's basement are particularly upsetting and disturbing.

1. The violent torture depicted in the film may be a bit much for some viewers. I was able to distance myself, but some folks may find some scenes too much to handle.

2. Jaime King ("Heart of Dixie") as the film's "final girl" just didn't cut it for me. Her rather one-note performance didn't make Beth a character I wanted to root for.

3. The movie keeps referencing an impending tornado which is threatening the Nebraska town in which the film is set but we never get to see any evidence of such a storm.

4. Stupid cops. A cop arrives at the house and obviously suspects something is wrong, yet he never calls for back up and (SPOILER ALERT) announces his presence without being sure the killer is actually dead.

5. The ending (SPOILER ALERT 2). Characters who should have been dead, survive and pull off a highly improbable kidnapping.

Overall, I liked the movie. It's one of the better 'Home Invasion' films in recent memory and proves that Bousman is capable of making a film that doesn't rely on weird makeup prosthetics or strange mechanical devices to make an interesting, if very disturbing, film. **1/2 (Two and a Half Out of Four Stars).