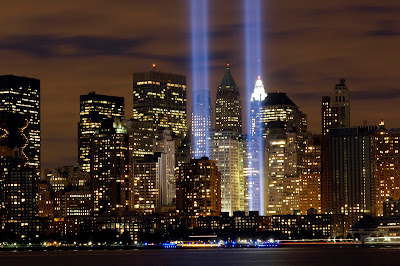 So, 11 years after religious fanatics* decided to use commercial airliners to murder over 3,000 innocent people, have things really changed? Flying presents more of a hassle than it did before 9/11... But real change?
Our troops are still being killed in Afghanistan in what has become the longest war in our nation's history. Saddam Hussein and Osama bin Laden are both dead, though Bashar al-Assad continues the wanton slaughter of his own people.  The so-called "Arab Spring" may have ousted a dictator in Egypt, only to have him replaced with a militaristic regime that is proving to be just as bad. The Taliban and al Qaeda continue to use religious fanaticism to indoctrinate their followers and incite them to violence.
And it's not just in the Middle East. Right here in the U.S., religious fanatics and extremists are using and abusing the Bible in their own bigoted campaign against the LGBT community. Today (via), I came across one of the most vile pieces of homophobic propaganda I have ever seen. Published by 'Mission America,' "What's all this fuss about something called 'gay?'" is one of the most bigoted and misleading documents I have ever seen. I won't quote from from it, because it literally makes me sick to my stomach, but you can read it here (don't say you weren't warned).
Bullies and monsters aren't always dictators and oligarchs. They are quite often the folks people in need turn to for solace and advice. But when the advice turns out to be hateful bile and outright lies, is it any wonder people are confused? And how horrible must it be for a young gay person of faith to read this kind of crap? This kind of garbage is exactly why the suicide rate among young LGBTQ people is so high.
One of my early boyfriends was an adorable Texan from a strict Baptist family. In fact, his brother was a preacher. After several months together, he suddenly grew fearful and broke up with me, citing his religious convictions. I later learned that he had hanged himself just two months later. I was not only angry, but profoundly sad that "God" had driven a bright, funny and endearing person to such depths of despair. It was also my first step toward Secular Humanism, though it would be a long time before I realized it.
I've said it before and I'll say again: Religion has been the cause of more war, pain, suffering and death than anything else in the history of mankind. "Believe what we tell you to, or suffer the consequences."
Every child is born an atheist. That is until they are poisoned by the beliefs imposed upon them by their family. I'll leave it to a much better spoken person than I to explain what I mean. Here's Richard Dawkins' response to the question "What if you're wrong?":

I don't want to demean anyone for believing whatever it is they believe. I do want people to think about why they believe it and how they came to believe it and whether or not what they believe is morally correct (and yes, there is a HUGE difference between morality and religion).
Bullies, haters and fearmongers will always want to rule over the ignorant and the superstitious. I hope that one day, none of those people will exist. Sadly, I fear that day is still a very long way away.

*You can use the word "terrorists" all you want, but their terrorism was the result of the exploitation of their religious fanaticism, pure and simple.
More, anon.
Prospero
Posted by Prospero at 10:45 PM