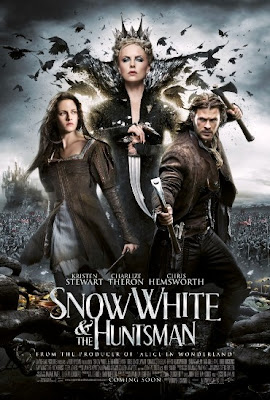 While I missed it when it was released to theaters in May, I very much wanted to see Snow White and the Huntsman and while in Miami, I got the chance to rent it as an in-room movie Saturday night.
I really loved almost everything about this movie, especially its dark and violent tone. And while many find the 1937 Disney classic to be rather dark, Snow White and the Huntsman is no Disney fantasy.
The movie opens with the deaths of both Snow White's mother (from an unspecified illness) and the murder of her father (hottie Noah Huntley of 28 Days Later and Your Highness) at the hands of his beautiful but ice cold new wife, Ravenna (the stunning beauty Charlize Theron). Snow White is hurried off to a tower cell where she grows up to be Kristen Stewart (Twilight). When the seemingly ageless Ravenna learns that she can attain immortality from her magic mirror (voiced by Christopher Obi of "Doctor Who" and Burke and Hare) if she can possess the beating heart of Snow White, Ravenna orders her creepy brother Finn (The Hurt Locker's Sam Spruell) to fetch her from the tower. Aided by a bird she'd rescued as a child, Snow escapes and makes her way to the Dark Forest, where Ravenna's horses cannot enter thanks to a convenient swamp. Ravenna then enlists Chris "Thor" Hemsworth's drunken Huntsman to retrieve her with the promise of resurrecting his dead wife.
There are four reasons to see the movie: Theron, Hemsworth, the special effects and the eight amazing actors who portray the CGI enhanced dwarfs. Ian McShane; Bob Hoskins; Ray Winstone; Nick Frost; Eddie Marsan; Toby Jones; Johhny Harris and Brian Gleeson make up the rattiest, dirtiest and most delightful band of gold-hearted miscreants in recent memory, even if it is a bit disconcerting to see them shrunken down to a third of their actual sizes. Theron is nothing less than mesmerizing as Ravenna and her beauty shines through even when made up as an old crone. No one plays a beautiful, evil bitch like she can. Hemsworth is fine, though his affected Australian/Irish accent is occasionally weird to the ear and as in The Cabin in the Woods, he doesn't spend nearly enough time unclothed for my taste. Spruell is also fine, his creepiness aided by his pale makeup and a choppy, bad Page Boy haircut.
Sadly, the dour-faced Stewart is hardly believable as someone who is supposed to be more beautiful than Theron (a task few young actresses would be able to fulfill), though it is the purity of her heart that makes Snow White the "fairer" of the two. Pretty Sam Claflin (recently cast as Finnick in The Hunger Games: Catching Fire) is the adult version of Snow White's childhood friend, William and he does his best with a role that could have been left out without affecting the movie in any way.
The fantasy elements, which include a giant troll; some very weird fairies; mushrooms with eyes and a rather magnificent version of the fabled White Stag, are often breathtaking and add just enough whimsy to keep the movie from being relentlessly grim. First time director Rupert Sanders (who was instrumental in the break-up of Stewart and her Twilight co-star Robert Pattinson - he of the creepy, pasty flat face) does a fine job balancing the more realistic elements of the film with the fantastical, though the movie does get bogged down a bit in the middle, though the infamous Poison Apple scene is handled quite cleverly. Fans of the original Brothers Grimm tale won't be disappointed by the dark tone and general dirtiness of the movie (almost everyone is covered in grime, mud and soot), though I wouldn't recommend it for children who know and love the Disney version or for adults who prefer "pretty" fairy tales with easily achieved happy endings. I didn't (and have no desire to) see Tarsem Singh's comedic Mirror, Mirror but I imagine it can't begin to compare to this movie.
*** (Three Out of Four Stars). Snow White and the Huntsman is rated PG-13 for "intense sequences of violence and action, and brief sensuality."