The Gayest Thing You'll See This Week + I May Eat Crow 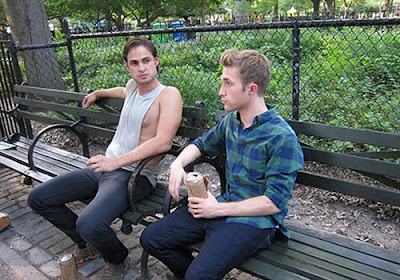 There is a new web series about to hit the net that's being touted as "the gay 'Sex and the City'" by no less than Entertainment Weekly. Based on the blog and subsequent novel "The Great Cock Hunt," the series explores what it's like to be a young, hot gay boy in New York City in the aughts. Ben Baur, who has had small roles on "Nip/Tuck" and TV Land's dreadful "Happily Divorced," plays Alex, a 20-something twink on the prowl. The show will air in a SFW edited version on LogoTV.com and an NSFW (reportedly featuring some full-frontals) version for pay on HuntingSeason.TV starting September 12th, with free versions airing a week later. You can catch a preview on the EW link above and a longer version at the show's site, here. "Suspicious packages," indeed!
My personal 'wild' times came about in my mid-30's, so I can only relate to the show's premise with a different POV. Of course, I was never a twink like Alex, so I have no idea how I'll respond to the series once I get to actually see it. Uncle P can much more relate to the very amusing gay murder mystery "Where the Bears Are," currently available on Vimeo.
As for the 'eating crow' portion of tonight's post; several friends, both here and on Facebook, let me have it about last night's "Downton Abbey" post, telling me that not only should I not judge a book by its cover but that I would actually enjoy it. "A campy soap with Maggie Smith rolling her eyes in the background..." "Funny, sexy and often outrageous..." "You would love it, dummy!"
Okay, I hear you guys. I'll give the show a chance. Now I just have to find time to watch the first few seasons and get all caught up. I guess this is where I should start:

I have not seen it either, but it is right up my alley, so to speak.