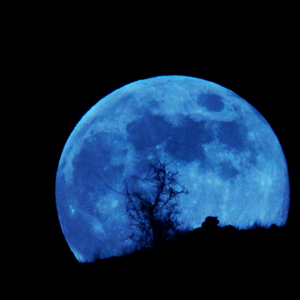 Yes, I know it was last night, but here are a few covers of my all-time favorite song, anyway:

And my all time favorite version from Cowboy Junkies, "Blue Moon Revisited (Tribute to Elvis):"


I'm not sure why 'Blue Moon' is my favorite song. It's just the perfect combination of lyrics and melody, I guess. Written in 1934 by Richard Rogers and Lorenz Hart, it has been covered by everyone from Billie Holiday to Cliff Richards and is one of the most recorded songs of all time (The Beatles' 'Yesterday' - another favorite song - holds the number one spot). I didn't really discover the song's power until 1981, when John Landis used three different versions of it on the soundtrack to his classic horror film An American Werewolf in London. Of course, that's the same movie that made me love Van Morrison's 'Moon Dance.'

I tried to take a picture of last night's celestial phenomena but even with my phone's zoom all the way out, it just looked like a splotch of light at the end of a light pole. And honestly, my luck with cameras has never been very good. My sister is the real photographer in the family. I'm much better at creating pictures on stage, than in a camera.
More, anon.
Prospero
Posted by Prospero at 11:47 PM