Retro Review: "Now You See Me" 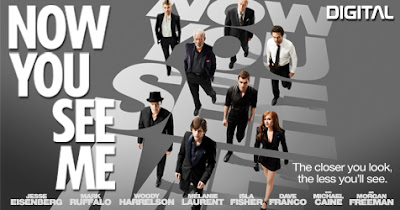 I missed Now You See Me when it was in theaters earlier this spring, though I found the concept to be fascinating. I caught it tonight OnDemand, simply because there was literally nothing else worth watching on broadcast or regular cable TV (no, I don't watch or care about "Breaking Bad" or the NFL and am not ashamed to admit it - bring on "The Walking Dead!").

Four street magicians (Jesse Eisenberg, Isla Fisher, Woody Harrelson and Dave Franco) are given Tarot cards with an invitation to meet at an NYC address by a mysterious, hooded stranger. A year later, billed as the "The Four Horsemen," they appear together at the MGM Grand in Las Vegas and pull off what appears to be a magical heist of a French bank, dispensing over 3 million Euros to the audience. Among that audience is magic debunker Thaddeus Bradley (Morgan Freeman), who has made millions exposing fraudulent magicians, starting in the 1970's with a magician who apparently died while trying to escape from a safe dumped into the East River. The four are immediately detained by the FBI, interrogated by Special Agent Dylan Rhodes (Mark Ruffalo); Agent Fuller (Michael Kelly) and Interpol Detective Alma Dray (Melanie Laurent). But with no real evidence, the four are released. Promoter Arthur Tressler (Michael Caine) follows the four to New Orleans, where they drain his bank account to enrich the victims of Katrina, much to the consternation of Rhodes and Dray. What follows is a cat-and-mouse game of deception, distraction and double crosses which kept me guessing right up to the movie's surprising end.

Director Louis Leterrier (The Incredible Hulk; Clash of the Titans) doesn't exactly have a stellar record, though he does manage to display a bit of flashy style here. The screenplay by Ed Solomon (Men in Black), Boaz Yakin (Safe) and Edward Ricourt has more than a few issues (the hooded stranger's motive is made painfully clear early on and the hokey secret society subplot is just a bit hard to swallow), but the cast's performances are earnest and it's obvious they're all having fun, especially when given some hilariously snarky dialog. And that's all this movie really asks of you - to have fun. Terrific SFX; multiple locations; an exciting car chase through Manhattan and a new twist on the heist genre are more than enough to make Now You See Me worth the 6 bucks it costs to see it OnDemand, especially if there's nothing of interest available.


Now You See Me 2 is already rumored and I must admit I wouldn't mind spending another 2 hours with these characters. All in all, Now You See Me  is a fun and entertaining twist on the heist genre, despite some rather obvious and silly flaws. **1/2 (Two and Half Stars Out of Four).

Good review Prospero. Not an amazing film, but still a bit of fun for what it’s worth.