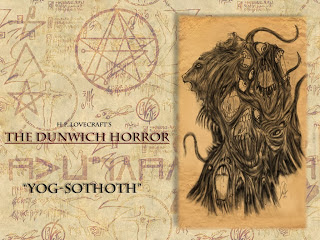 This past week especially has been that weird transitional week for TV. The Summer shows are just about over and the new shows and seasons just starting to trickle in, so there isn't a whole lot worth watching, even on the obscure, niche channels. So I've been doing a lot of channel surfing. If something looks interesting along the way, I'll DVR it and move on. Such was the case when I came across a movie I didn't even know existed on SyFy, 2009's The Dunwch Horror, based on the H.P. Lovecraft story of the same name. Then I saw the cast, which included Jeffrey Combs (a staple in every modern Lovecraft movie since Re-Animator) and Dean Stockwell! Yes, Dean Stockwell from "Quantam Leap." And even more importantly, Stockwell - along with Sandra Dee; Ed Begley; Lloyd Bochner and Sam Jaffe (all solid B-Listers at the time) - was the star of the 1970 film of the same name and origin. Not a lot happens in the 1970 version and it's probably the least scary horror movie of the era.


Tonight, I sat down to find out why I never heard of the 2009 version. And it was all too soon apparent. This movie is so ineptly made; so abysmally acted; so poorly written and features some of the most ridiculously lame physical FX since Ed Wood's Bride of the Monster. The story revolves around the search for the original copy of the fabled Necronomicon, a book used to summon the return of ancient evil gods who once ruled the earth, so it can instead be used against a group of cultists intent on restoring the Old Ones' rule. Stockwell plays a professor of Cthuhu-ology or some such idiocy, who is brought into exorcise a young girl possessed by a 5000 year old demon, using only a cheap, plastic ankh and 60's-era Japanese Kaiju animated power rays from his bare hands. Oh, and a Rubick's pyramid his assistant found under the floor. Meanwhile, a young couple on a road trip are stalked at a rural gas-station by Wilbur (Combs, doing his best demonic Billy Bob in Sling Blade via Jon Lovitz) who brings her to his crazy mother and grandfather so they can feed her to his demonic twin, Yog Sothoth. We know these people are evil because the film does weird little skips when they're on screen. While elements of this version run closer to the original story, the dialog is pure drivel and the acting is... well, I'm guessing half the cast got paid in weed, a quarter got paid in coke and a quarter paid and/or had sex to be in it. The laughable 'special effects' include poorly animated "magical" lights, ridiculous costume/make-up monster effects and a raging pink and purple storm cloud of apparently gay evil.


Honestly, there are no words to convey how stupefyingly bad this movie was. I deliberately chose the word 'stupefyingly' because as dreadful as this movie was, I couldn't stop watching. I was truly stupefied (not so much that I didn't manage to fast-forward through the commercials. If you happen upon this movie in a similar way, remember Indy's advice to Marion: "Don't look at it! Shut your eyes, no matter what happens!"

I almost saved that one for Turkey Month (and may revisit it), but I wanted to share my thoughts fresh. Further reflection may yield more hilarious insights. .00000003 Stars Out of Four.