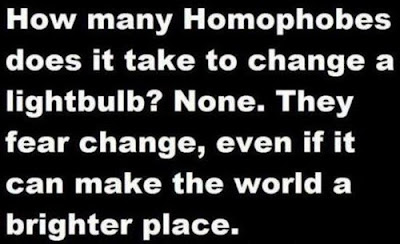 I have to wonder why, in the second decade of the 21st Century, the majority of our planet's citizens remain a bunch of superstitious, uninformed and downright ignorant jerks.

The Russians have basically declared war on the LGBT community. Muslim nations continue to subjugate women and criminally punish gay people just for being themselves. Republican asshats like Rick Perry refuse to recognize basic Human Rights and fear-mongering jerkwads like Bryan Fischer are allowed to spread hateful lies about Nazis being gay.

I know... I've been on this particular soapbox for a long time. But it's a soapbox I will not step down from until everyone realizes what a bunch of a-holes they're being.

And it's not just an LGBT issue. Middle-Eastern women are still having acid thrown in their faces or being murdered for expressing their autonomy. Children are still being sold into slavery (both sexual and menial). Refugees seeking better lives are still being exploited by farmers, pimps and pornographers. Dictators are using unspeakably awful weapons against their own people. Horrors are still being perpetrated against people all over the globe. Why? It's not like there are no agencies or groups trying their best to put a stop to these atrocities. In fact, there are probably more such groups than ever before.

This is 2013. We all should be past this crap and trying to figure out how to feed, clothe and house everyone on the planet we all share.

I have no idea how to fix this mess (well, maybe a few, which many would reject), but I suspect that Education has the best chance of doing so. That and the eradication of irrational religious beliefs. But that just brings us back to fear...

Maybe Global Warming is the answer, after all. Humans seem to be the worst thing to happen to Earth since the extinction of the dinosaurs. I hope the cockroaches will take better care of the planet than we have, once we're gone.

Rant over (for now). More of my usual nonsense, anon.
Prospero