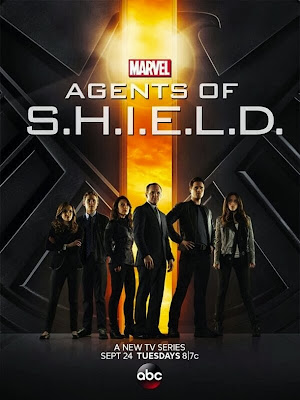 Marvel, in their quest to dominate the superhero genre in all media, has launched the most anticipated new show of the season. ABC's "MAoS" is the second brand new show of the season and the second to become permanently scheduled on my DVR. Created by Joss Whedon (Marvel's The Avengers; "Buffy the Vampire Slayer") and directly tied to Marvel's ever-increasing role in popular culture and entertainment, "MAoS" may well do what "Heroes" and "No Ordinary Family" failed to do. If you haven't seen it, there are spoilers ahead.

As I am sure everyone expected and was delighted to find, "MAoS" was slick, smart, action-packed and an awful lot of fun. Having the most fun of all is Clark Gregg as Agent Coulson (and the only permanent cross-over character from the previous films). But... wait... didn't agent Coulson die in The Avengers? Well... Coulson explains that Nick Fury faked his death to rally the Avengers into a team. Coulson recovered from his wounds at a spa in Tahiti. Of course we find out... well, Coulson is either a clone with a memory implant or Coulson, actually raised from the dead. I'm guessing we won't find out this season. Cobie Smulders crossed over for the pilot, as well, recreating her role as Maria Hill. The rest of the team is made up of Agent Grant Ward (ridiculously handsome Brett Dalton - those names seem somehow easily interchangeable); Agent Melinda May (Ming-Na Wen); physicist Leo Fitz and biologist Jemma Simmons (Iain De Caestecker & Elizabeth Henstridge) are known collectively as "Fitzsimmons" while hacker/conspiracy blogger Skye (Chloe Bennet) who has skills they need.

Just about everything in the pilot, from the writing, casting, direction and special effects were simply top-notch. And they set a perfect mythology/mystery in motion with the need to find and stop the person and/or persons behind "Project Centipede," which (if the writers are smart) should be a recurring theme among stand-alone episodes, rather than the season's whole focus. But who the heck am I to tell Joss Whedon and company how to write their show, anyway?  Anyway, if you didn't watch it, you should. Geeky fanboy fun for the whole family. **** (Four Out of Four Stars)

You should check out this video. I think you'll love it.

We binge watched the first two episodes. I am very excited for this. My desire for it to be good and do well will keep me with it.