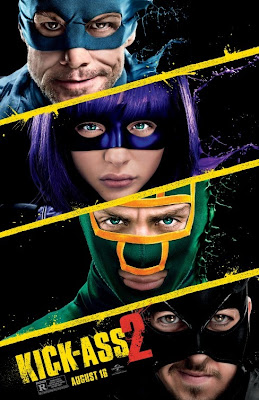 D and I really enjoyed the 'real-life superhero' movie Kick-Ass, director Matthew Vaughn's (Stardust; X-Men: First Class) 2010 entry into the genre. 3 years later, Dave 'Kick-Ass" Lizewsky (Aaron Taylor-Johnson) is back with a few new friends. Mindy 'Hitgirl' Macready (Chloe Grace-Moritz) has continued her costumed crusade against evil-doers, despite the objections of her guardian, Detective Marcus Williams (Morris Chestnut) though Dave has hung up his green and yellow costume, resulting in intense boredom. So bored, in fact, he contacts Hitgirl and convinces her to team up and start training again. When Marcus discovers she's been hitting the streets as Hitgirl again, he makes Mindy promise she'll stop and Kick-Ass goes in search of a new partner in the form of Dr. Gravity (Donald Faison). The two soon find themselves members of the superhero team 'Justice Forever,' headed up by former mob-enforcer turned Born-Again Christian, 'Colonel Stars and Stripes' (Jim Carrey). Meanwhile, former superhero 'Red Mist' (Christopher Mintz-Plasse) wants revenge for his father's death at Kick-Ass' hands and after his mother's death transforms himself into the kinky pleather-clad super villain "The Motherfucker," using his wealth to amass an army of killers and assassins to help him get said revenge.

Directed and co-written by Jeff Wadlow (Cry Wolf; "Bates Motel"), Kick-Ass 2 turns out to be a somewhat worthy sequel, though it sorely lacks Vaughn's subtle humor and attention to detail. Taylor-Johnson is fine here (and incredibly ripped), falling comfortably back into the role, while Grace-Moritz gets to tease some of her upcoming title role as a bullied outsider in the Carrie remake due later this fall. Mintz-Plasse is all over the place and over-the-top as the blind-with-rage villain, but he makes it work. Faison and the rest of the Justice Forever team are fun and funny, though Carrey is poor substitute for Nicholas Cage (who was spot on as Batman-wannabe Big Daddy in the first film) and Chestnut is wasted in a role that could have been played by almost anyone. Muscular Russian body builder Olga Kurkulina is terrifyingly imposing as a former KGB assassin "Mother Russia." but comedian John Lequizamo is also wasted as Mintz-Plasse's bodyguard/Man Friday, Javier.

The plot gets bogged down a bit while both Dave and Mindy take time to rediscover why they do what they do and a purely sexual relationship between Kick-Ass and 'Night Bitch' (Dawn of the Dead's Lindsey Booth) distracts and cheapens the premise. And while Kick-Ass was full of violence and murders, Kick-Ass 2 ramps it up with loads of gore and excessive cruelty (which, in the aftermath of the Newtown shootings, led Carrey to decry the film's violence). Costume designer Sammy Sheldon has loads of fun creating 'real-life' super & villain costumes and Production designer Russell de Rosario manages to create some very amusing hyper-realistic New York settings.

I saw the movie with my friend Mike, who agreed that while it was a fun, 'park-your-brain-at-the-door' actioner, it wasn't quite as good as the original. Kick-Ass 2 is rated 'R' for Strong Violence; Pervasive Languge; Crude and Sexual Content and Brief Nudity. ** (Two Out of Four Stars). The red-band trailer below is probably NSFW: