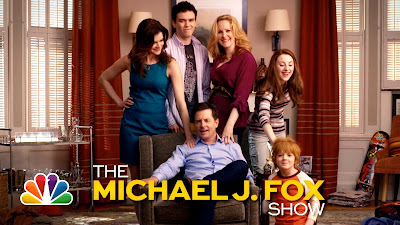 I may or may not have mentioned that I kind of liked "Mom" with Allison Janey and Anna Faris and I really want to like "The Crazy Ones," but it will take another episode to convince me. NBC smartly aired both the pilot and second episode of Michael J. Fox's return to situation comedy, playing a local news anchor with Parkinson's who 'decides' to return to work after taking five years off to spend with his family (all of whom are just a little tired of his over-attention). Betsy Brandt, straight off her as-of-this-writing-over stint as Marie on something called "Breaking Bad," plays Mike's wife, Annie and Kate Finneran is his sister, Leigh. The rest of the cast is rounded out by Ana Noguiero as his idolizing field producer and Wendell Pierce as his boss.

I really expected to hate this show (not as much I hated "The Goldbergs," but that's another review). I was expecting something hokey and exploitative, which it almost was. Luckily, the show has some remarkable things going for it, the first of which is it's terrific cast. Fox is all in and he and Brandt share an excellent chemistry, and while she does that best she can with kind of a jerk of a character, Finneran manages to hold her own.  Sure, they take a cheap shot or two (mad at his boss, Mike throws a dinner roll at him, saying "Oops! Parkinsons!"), but there were also just enough surprisingly and genuinely funny moments in both episodes, that I have to give it "Conditional Approval" (a Day Job-related term). The mostly excellent writing will only get better as the writers and cast continue explore these characters and their relationships. My only real quibble with the show is its blatant "Modern Family" faux-documentary format.  Has the fourth wall been crossed once too often, with no going back?

It's certainly not the best network sitcom ever (or even this season, so far), but it was a lot better than I ever expected it to be. **1/2 (Two and a Half Stars Out of Four).


Many years ago, I wrote a TV parody stage play in which one character went on a talk show and claimed to have proof that Fox was the anti-Christ. This was at the height of his popularity, after the Back to the Future series. If I was writing that play today, it would be Justin Bieber or one of the lads from 1D (probably Harry or Liam). I have nothing but admiration for Mr. Fox.

Hopefully they'll find a groove and they show will get even better.