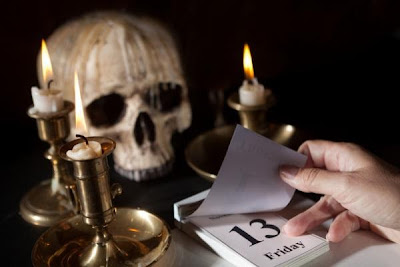 Today is Friday the 13th. Or, a randomly assigned date on the Julian calendar with no real significance other than a way to keep track of the Earth's revolution around the sun. Of course, for millions of superstitious people, Friday the 13th is a day to be extra cautious. They avoid walking under ladders; stay away from black cats; don't open umbrellas indoors do their best to not break mirrors. Friggatriskaidekaphobia is the fear of Friday the 13th, the origins of which are unclear, but probably date back to the early 1800's, when just about everyone was religious. According to Christian mythology, Jesus died on a Friday after having been betrayed by his 13th disciple, Judas. 13 is also an unlucky number in Norse mythology involving the mischievous Loki who turned up as the uninvited 13th guest at a dinner in Valhalla.

Even as a kid (when I believed), I was never very superstitious. Being in the theatre (out of respect for my fellow actors who are superstitious), I do avoid saying  "Macbeth" in a theatre, if only to keep my cast-mates from freaking out - even though the production of Macbeth in which I played Ross was completely free of problems, injuries and/or technical glitches. And Friday the 13th is nothing compared to some of the superstitions people hold around the world. Here are a few of them (via):

Spit on a new (baseball) bat before using it for the first time to make it lucky.

To protect yourself from witches, wear a blue bead.

It's bad luck to leave a house through a different door than the one used to come into it.

To drop a fork means a man is coming to visit. (I better start dropping forks!)

If 3 people are photographed together, the one in the middle will die first. (But what if you are in more than one picture of 3 people?)

If you leave a rocking chair rocking when empty, it invites evil spirits to come into your house to sit in the rocking chair.

Do not place shoes upon a table, for this will bring bad luck for the day, cause trouble with your mate and you might even lose your job as a result (Uncle P's mother insists it is bad luck to put new shoes on a table).

The number of Xs in the palm of your right hand is the number of children you will have (This childless gay man has three).

The list goes on and on. And superstitions vary from country to country. For example, the seventh son of a seventh son has magic powers, according to Irish folklore, but is a vampire in Romanian legend.

Here's the thing: it's all nonsense. There is no such thing as magic. There are no supernatural forces controlling your life. Eating 12 black-eyed peas on New Year's Day will do nothing but send the peas' nutrients into your system and playing with a Ouija board will not invite Captain Howdy to possess you. There are no such things as vampires; werewolves; demons; angels; Bigfoot or chupacabras. Fairies exist only in Disney movies; handling toads does not give one warts; cats don't steal babies' breath and repeating "Bloody Mary" three times into a mirror in a dark room will not cause an evil spirit to leap out of said mirror and kill you. Wearing special underwear will not help you win a game or land a role in a play for which you're auditioning. A rabbit's foot key-chain is just a preserved bit of a dead rabbit and a four-leaf clover is simply a genetic anomaly. Blowing all the candles out on your birthday cake just means you have good lungs and wishing on a falling meteor or a coin tossed into a fountain or well is as effective as playing special numbers in the lottery (i.e. not effective at all). Wearing green on game day does nothing to help the Eagles win; rubbing a lamp will not release a djinn who will do you bidding and kissing the Blarney Stone will only transfer germs from the 10,000 other people who kissed it that week.

If you believe in any of the above-mentioned nonsense, I feel sorry for you. Get over it and get on with your life, already.