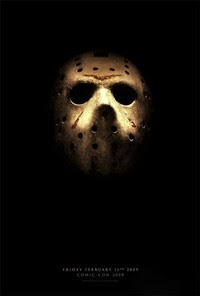 Did you know that there are two Friday the 13th's in a row this year? When F13 occurs in a February that is not in a Leap Year, then it occurs again in March, which is exactly what happens this year. How appropriate is it then to premiere the re-boot of the horror franchise Friday the 13th?

I didn't see the original movie in a theatre. But it was the first movie I ever saw on our then state-of-the-art VCR. The machine was a clunky monstrosity and looked much more like an old cassette recorder, complete with gigantic push buttons and a tape bay that popped up out of the top. It weighed a ton and took up the entire lower shelf of our TV stand. But man, were we excited to get it. Now we could see all the movies we wanted. And in the days before Blockbuster or Netflix, the biggest section at our local Mom & Pop video store was the Horror section. So when Dad brought home Friday the 13th as our first rental, Mom wasn't thrilled, but my sister and I were. We sat riveted, watching a group of unknown actors (all but one of whom would remain that way) get slaughtered by an axe-wielding maniac at a secluded campground. Thanks to John Carpenter's masterpiece, Halloween, the slasher film was about to take the 80's by storm and writer/director Steve Miner took full advantage of the trend (and the skills of makeup FX artist Tom Savini) in his first major hit. Miner's film also helped establish the trend of holiday-themed horror, including My Bloody Valentine; Mother's Day; Black Christmas and a slew of other films.

Looking back, the movie is pretty bad, as the trailer below can attest:

The plot is ridiculous. A grieving Mom (Betsy Palmer) takes revenge for the drowning death of her retarded son by killing camp counselors who had nothing to do with it, 20 years after the fact. And how the hell did a petite, middle-aged woman have the strength to hack, mangle, hang and mutilate all those strong young folks? She may have had surprise on her side, but any one of those strapping kids could have taken her down with one hand tied behind their backs. And the acting, despite the presence of a young talent who would later take the world by storm in Footloose, was awful. So what did it have going for it? Tom Savini. Savini's work on the previous year's Dawn of the Dead had cemented him as the guy for horror makeup effects, and he goes to town here (that's him in a wig falling through the window in the trailer). But even so, the effects are rather tame compared to what we see today. In the sequels that followed, the killer was now supernaturally immortal Jason Voorhees, a magically grown-up version of the drowned retarded kid, hacking up sexually active teens just because he could. Hell, in his last appearance on film, Jason actually does battle with Freddy Kruger, another 80's horror icon from the Nightmare on Elm Street franchise. As my younger friends would say, 'redonkulous!'

Now, almost 30 years later, producer Michael Bay has "rebooted" the series, from all accounts combining elements of the first three movies to create a new take on the franchise. Director Marcus Nispel, who brought us the not-terrible remake of Tobe Hooper's classic The Texas Chainsaw Massacre is behind the lens, which actually gives me hope that this might not be an awful movie at all. That's not to say it will be good, though the trailer makes it look better than some of the recent, PG-13-rated J-Horror movie remakes:

The production values certainly look better. And star Jared Padalecki (TV's "Supernatural" and "The Gilmore Girls") is certainly yummy enough. But I really have to ask, is F13 a movie that really needs to be remade? The proof, as they say, will be in the pudding. I am thinking of going on Saturday as part of an Anti-Valentine's Day event with a friend. If I do, I'll be here with a full review on Sunday.
Until then, I'll leave you with one bit of Hollywood Horror Trivia. The iconic 'Friday the 13th Sound" (ch-ch-ch-ch... bah-bah-bah-bah) always sounded to me like "Kill, kill, kill, kill... blood, blood, blood, blood." And I was close. According to Miner, it was a re-mixed recording of Palmer whispering "Kill her!"
More, anon.
Prospero
Posted by Prospero at 10:12 PM

Ah, the old top loading vcrs. Our first vcr was top loading, too. Well, at least we didn't go beta.

I know this will come as a shock, but I'm way too much of a pussy to watch scary movies. Especially if I don't have a man's arms to jump into during (and especially after) the movie. :)

Growing up Hungarian, there were two major stars in our household, Mickey Hargitay and Bela Lugosi. I saw every horro movie ever made, thanks to "Uncle Bela" and have grown quite jaded about them. It takes a REALLY scary movie to get me upset, and those are few and far between.