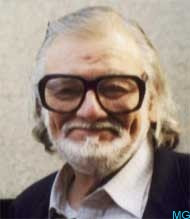 I knew I was on a zombie kick for a reason. Today is the birthday of the Father of the Living Dead, director George A. Romero. Every genre fan knows the story of how a cast-financed movie not only became a cult classic, but inspired an entirely new and enduring sub-genre. No matter how many other writers or directors approach the subject; no matter whether you prefer slow zombies or fast (I'm the slow, shambling zombie kind a guy - they're much funnier); whether in English or Italian; none of them would exist without Papa George.

And while he's made some other, pretty terrific genre films (Martin; The Crazies; Creepshow; Monkeyshines; The Dark Half) and was Executive Producer for the syndicated anthology show "Tales from the Dark Side," Romero's legacy will always be his films of the mysteriously resurrected dead, unstoppable in their hunger for living flesh. I suppose there are far worse things to be known for. Happy Birthday, George!