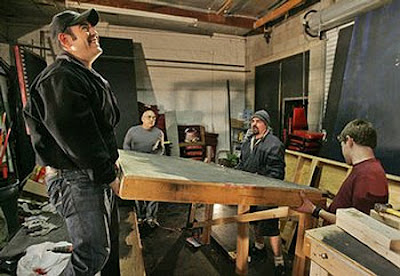 (via) San Diego's Ion Theatre Company has vacated it's home, because they learned that their landlord was a major donor to Prop 8.
According to SignOnSanDiego.com, “The five-year-old Ion is known for its strong emphasis on diversity and inclusion in its programming; Paris and Raygoza, the company's founders, are also partners in life."
Raygoza said the two didn't realize until late last year that the theater's landlord was one of Proposition 8's biggest financial backers. Caster became the target of a heated campaign by the gay community after his donations and those of family members were publicized."
A call seeking comment from Terrence Caster was redirected to a recorded message in which he defended his donations and insisted he has no ill will toward gay people. “
Read the full article here.
Here's the thing: If a non-profit theatre company, whose livelihood is dependant on ticket sales, grants and donations, can take a stand, then so can the rest of us.
I continue to urge you to write your local, state and federal representatives. Sign every petition you can find; send any money you can afford; call upon your friends and family. Do whatever you have to do to get this heinous motion repealed. And not just in California. In November of 2004, 11 states amended their constitutions to define marriage as between a man and a woman. My home state of Pennsylvania was among them. Is this Orwell's 1984? How we can allow government to legislate love? We can't. And if enough voices are heard, we won't.
OK - off my high horse for a while. More on movies, TV and theatre, soon, I promise. But only if you promise to keep fighting the good fight. Wear a White Knot, write your elected officials and vote out those who disagree. Together, we can make a difference.
More, anon.
Prospero
Posted by Prospero at 11:57 PM

And I wasn't aware of White Knot until now. Thanks for letting me know!

P.S. I started "Following" your blog just now and in my head, I keep singing, "I will follow him. Follow him wherever he may go!...