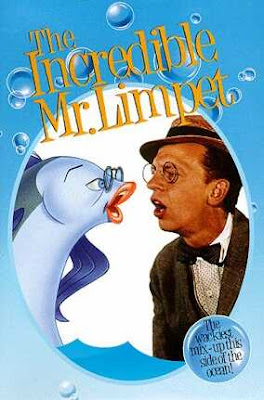 Don Knotts, probably best known as the bumbling deputy Barney Fife on "Mayberry, RFD," left us last February. He was an amazing physical comedian; gangly, geeky and somehow adorable, he played a hopeless nudnick in countless movies and TV shows. My sister and I were particularly fond of two of his movies as kids: The Ghost and Mr. Chicken (more on that movie, later) and 1964's The Incredible Mr. Limpet.
Knotts plays Henry Limpet, a patriotic fellow who, because of his astigmatism (something to which I can totally relate) has been classified as "4F," or Unfit for Duty. Yet he desperately wants to do his part in service to his country during WWII. His nagging, but loving wife (the amazing Carole Cook, still going strong at 78 in a recent episode of ABCs "Gray's Anatomy") and his best friend, Navy man George Stickle (Jack Weston, oh-so-hilarious in the movie version of Terrance McNally's The Ritz), wish Henry would just realize his place in the world and forget his dreams of glory.
But Henry has another obsession: Fish. He could stare at them all day. He just loves their bright colors and graceful movement as they glide through the water without a care in the world. He loves them so much, in fact, he wishes he were one himself:

One day, while visting Coney Island with Bessie and George, Henry falls into the water and is magically transformed into his heart's desire:

As a fish, Henry discovers he has an amazing sonar ability and he uses it to help the Navy track down and destroy Nazi U-Boats, eventually becoming the hero he always dreamt he'd be:

Directed by Arthur Lubin (the Claude Raines version of The Phantom of the Opera) and featuring some terrific old-fashioned hand-drawn animation from a team led by Looney Tunes animator Gerry Chiniguy (I particularly love the way Chiniguy interprets Knotts as a fish), The Incredible Mr. Limpet is based on a novel by Theodore Pratt. The screenplay, by Jameson Brewer and John C. Rose features songs composed by Harold Adamson and the movie has some hilarious voice performances from Paul Frees ("Rocky & Bullwinkle") as "Crusty the Crab" and character actress Elizabeth MacRea as "Ladyfish."
A sweet and delightful fantasy, typical of the early '60's, The Incredible Mr. Limpet is listed on my sister's Facebook page as one of her favorite movies. It's also one of mine. If you have the chance to catch this movie on TCM or AMC, watch it with your kids (or godchildren, nieces, nephews or whomever). Or rent it from Blockbuster or Netflix. A silly, funny and nostalgic family movie, you'll all love it. I promise.
By the way, a limpet isn't exactly a fish, but rather a crustacean, like a clam or a conch. I imagine Pratt must have chosen the name for its comic effect, more than anything else.
More, anon.
Prospero
Posted by Prospero at 10:09 PM

I've always loved this movie. I think was always attracted me to it was the fantasy of escaping from a less-than life to a life of your dreams, meaningful contribution and happiness.