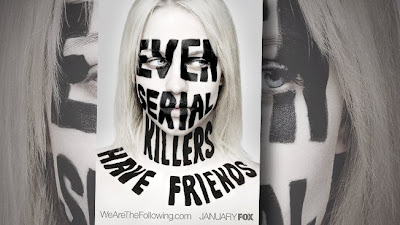 A college friend; fellow actor; writer and pretty smart guy, apparently despised the new FOX thriller "The Following." He gave his reasons (which I will address) and has every right to disagree with me. And while I respect his opinion, mine is different. Ebert and Roeper disagreed all the time. And that's as it should be.

James Purefoy ("Rome") is serial killer Joe Carroll, a Poe-obsessed professor of Romantic literature who finds beauty in the death of young women, having killed 14 of his students and removing their eyes (yeah, it's that kind of show). Kevin Bacon (in his TV series premiere) is former FBI Agent Ryan Hardy, who captured Carroll 8 years ago. Here There Be Spoilers:

The pilot episode begins with Carroll's escape from Federal prison just weeks before his scheduled execution, brutally murdering several guards in doing so. Hardy, on disability leave thanks to the pacemaker which had to be installed after Carroll stabbed him in the chest, gets a call to "consult" and finds himself once again hunting a deranged genius - but now Hardy has spent 8 years amassing a cult-like online 'following' who worship him and will do anything and everything he asks of them. The rest of the cast includes cutie Shawn Ashmore (X-Men) as young Agent Mike Weston - a computer savvy devotee of Hardy's True Crime book about Carroll; Maggie Grace ("Lost") as Carroll's only other surviving victim and Natalie Zea ("Californication;" "Justified") as Carrol's ex-wife, Claire.
Created by Kevin Williamson (Scream; "The Vampire Diaries") "The Following" is by no means perfect. Plot-holes abound; some dialogue is less-than-perfect; and plot twists can be seen coming like an MTA train on the 1-9 line. But plenty of cringe-inducing gore (ice-pick-to-the-eye, anyone?); terrific performances (Purefoy practically oozes 'Evil' and yes Mark, Bacon was 'twitchy.' Ever meet a traumatized alcoholic that wasn't?); a dash of by-now-familiar procedural; just enough backstory to set up an intriguing puzzle and loads of atmosphere manage to overcome it's flaws. The addition of the talented Annie Parisse ("Person of Interest;" "Rubicon") in the next episode only makes me more excited to see it.

Not for the squeamish or jaded, I found "The Following" to be one of the most exciting and intriguing new thrillers on network TV. And while it will certainly never replace the exiting "Fringe," I'll keep watching "The Following," willingly giving in to its conceits and hopefully finding the remaining episodes as just downright entertaining as the pilot. *** (Three Out of Four Stars). The trailer below may be NSFW for violence: