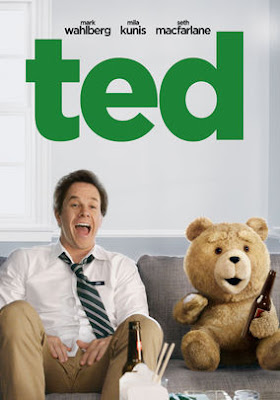 Full disclosure: My 71 year old "Walking Dead" loving mother not only adores Stewie Griffin (the fey, murderous baby on "Family Guy") - she also thinks Seth MacFarlane is "cute as a button" and has actually said to me "I wouldn't complain if you dated him." Yeah, welcome to Uncle P's world (truth be told, I wouldn't complain, either).

Anyway... MacFarlane's feature film debut,  Ted was one of this week's Friday night specials on FiOS OnDemand, so I finally got to see it and was actually pleasantly surprised.

As a young boy, John Bennett has no friends, so when he wishes his new teddy bear was alive, magic makes it so. Fast forward and the 35 year old John (Mark Wahlberg) has a beautiful girlfriend, Lori (Mila Kunis), but still spends most of his time getting high and watching Flash Gordon  and "SpongeBob Sqaurepants" with Ted (voiced by MacFarlane, who also directed and co-wrote). John works a dead-end job at a car rental agency while Lori is a VP at a company run by the douchy Rex ("Community" and "The Soup" hottie Joel McHale). After four years together, Lori demands that Ted move out so John can move on and finally become a responsible adult. Meanwhile, creepy Donny (Giovanni Ribisi) wants Ted for his equally creepy son, no matter what the cost.

Loaded with MacFarlane's typical lowbrow humor (this time with unedited profanity -- oh, so much profanity) and plenty of drugs, hookers, White Trash girls and completely ridiculous situations, Ted turns out to be a surprisingly heartfelt movie about friendship, love and loyalty. Seriously. Often crude, but never really mean-spirited and taking shots at every minority (much like MacFarlane's three animated series on FOX), Ted surprised me at almost every turn; had me laughing uproariously at times (the motel-room fight scene had me crying with laughter) and made references to so many 80's movies and TV shows, I almost couldn't keep count. Featuring many of MacFarlane's regulars - Alex Borstein; Patrick Warburton; Ralph Garman; Laura Vandervoort and Patrick Stewart (as the narrator) and cameos from Bill Smitrovitch; Sam J. Jones; Norah Jones; Ted Danson; Ryan Reynolds (as Warburton's boyfriend!) and Tom Skerritt, the cast is a literal smorgasbord of talented folks who aren't afraid to make fun of themselves.

Wahlberg, relying on his hometown roots with an SNL-worthy 'Bahston' accent is just terrific as John, giving in to the premise's nonsense with abandon. Kunis, as a sort-of uptight Philly girl who can't help but love her stupid, gorgeous lug, is obviously having as much fun as everyone else. MacFarlane's direction is fine and Walter Murphy's "Family Guy"-ish score provides all the right notes (pun very much intended). Of course, the real star is Ted, himself, flawlessly brought to digital life by Tippett Studios. I had no problem believing Ted was real, thanks to the truly excellent CGI FX.

Raunchy and very funny at times, Ted may not be everyone's cup of tea, but I found it to be a rather hilarious distraction with a proverbial 'heart of gold.' Rated "R" for language, violence and drug use, Ted is currently available OnDemand and on DVD/BluRay. If you are a fan of MacFarlane's irreverent animated TV shows, I'm sure you will like Ted as much as I did. If you aren't, I don't recommend you see it. **1/2 (Two and a Half Stars Out of Four). The trailer below is most definitely NSFW:


I'm actually looking forward to see how MacFarlane does hosting this year's Oscars. He certainly can't be worse than some the show's most recent hosts. He'll at least be nice to look at, if nothing else.