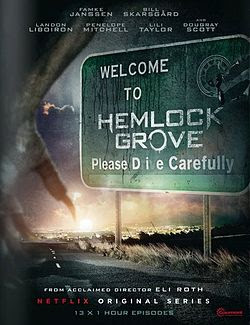 Writer/Director/Actor/Producer/'JewBear' Eli Roth is one the horror genre's busiest men. He recently opened the first permanent Haunted Attraction in Las Vegas  and is about to appear in the US premiere of a film he both co-wrote and produced, the Chilean horror movie Aftershock. Roth's latest project is the 13-episode werewolf series for Netflix, "Hemlock Grove."

Starring the highly underrated Famke Janssen (X-Men; House on Haunted Hill); Dougray Scott (My Week with Marilyn); Lili Taylor ("Six Feet Under") and Bill (son of Stellan and brother of Alexander) Skarsgard, "Hemlock Grove" appears to be the werewolf series that MTV's "Teen Wolf" aspires to be. And though "Teen Wolf" certainly has its moments, I suspect that "Hemlock Grove" will be both bloodier and sexier.

Thanks to fellow blogger and Facebook friend JA of My New Plaid Pants, comes the following trailer for the series, which has Uncle P almsot foaming at the mouth:


I may very well part with some hard-earned cash just to watch what promises to be a rather insane show when Netflix premiers all 13 episodes of "Hemlock Grove" this coming April. Hopefully, my holiday bills will be paid off by then.

Netflix is always giving free memberships for a month. Since they're posting all 13 episodes at once, you'll be able to watch them all and then cancel. No cost!