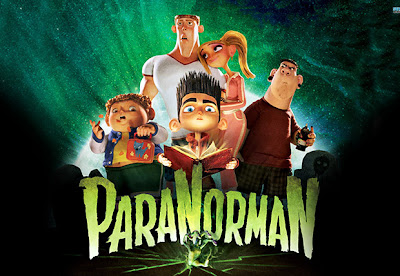 Norman is a boy who can talk to the dead. His parents are worried and most of the other kids at school make fun of him because they don't believe him but his dead Grandmother and all the dead people in the town of Blithe Hollow know better. After being befriended by the equally picked-on (for being fat)  Neil, Norman is visited by his Uncle and charged with stopping the 300 year old curse of the Blithe Hollow Witch (who's story apparently drives the town's tourist trade). Eventually joined by Neil; Neil's older brother Mitch and his own older sister Courtney, Norman discovers the truth about the witch and how to keep her from destroying the town for good.

This often hilarious stop-motion movie takes on horror movie tropes with glee, and directors Chris Butler (who wrote the screenplay) and Sam Fell (Flushed Away) do their best to make sure their actual message is front and center. On the surface, ParaNorman is a comedic horror story about ghosts and zombies but at heart, it's an anti-bullying tale which focuses on discovering one's own self-worth while breaking down stereotypes in often surprising ways.

The film's voice cast, which includes Kodi-Smit Mcphee (Let Me In); Anna Kendrick (Pitch Prefect); Casey Affleck; Christopher Mintz-Plasse (Superbad); Leslie Mann (Knocked Up); Broadway legend Elaine Stritch; the highly underrated Jodelle Ferland; Tempestt Bledsoe; Alex Borstein ("Family Guy") and John Goodman is just terrific. While I personally didn't care for most of the character designs (the super-exaggerated faces and bodies of many of the characters were somehow off-putting - though I must admit to loving the climax's version of the 'witch'), the movie's central themes and decidedly dark humor more than made up for this minor flaw. And (SPOILER ALERT) it was amazing to see the first animated family film to feature an openly gay character, even if we don't find out he's gay until the end.

If you missed it in the theater this past Halloween, I highly recommend you see it OnDemand or DVD. It's certainly entertaining while delivering an important message of tolerance on many levels. *** (Three Out of Four Stars).

ParaNorman is rated PG and currently available OnDemand and on DVD and BluRay.