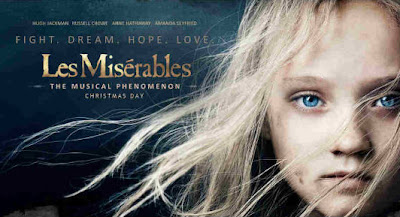 Good news: Les Miserables isn't as bad as the haters say it is.  Bad news: It's not nearly as good as it's fans would have you believe.

While it seems everyone wants to adapt movies into Broadway musicals these days (thank you, Galactic Empire), it's still risky to do so in reverse. For every Cabaret or Chicago, there's a Phantom of the Opera or The Producers. And while
I found much to really like about what director Tom Hooper (The King's Speech) did with the piece, many of his choices seemed inconsistent with the scope of an epic tale like Victor Hugo's massive anti-war/redemption/romance.

There are many great things to say about Hooper's casting, the most pleasantly surprising being Amanda Seyfried's lovely, sweet and honest soprano - like I needed another reason to love her. I know much has been made about the performances of Anne Hathaway, Russell Crowe and Hugh Jackman, both good and bad. Hathaway is very good in her rather brief 20 minute appearance in a nearly 3-hour film. And while Crowe is the weaker singer (they transposed the vocal part of every one of Javert's songs), Jackman actually comes of the worse, nearly strangling to death on "Bring Him Home" (so gorgeously rendered by Colm Wilkinson in the original London and New York Productions*). Hathaway's version of "I Dreamed a Dream" my not be the (and I hate to use the word) 'prettiest,' but the performance probably comes closest to the lyrics' intent than any which may have come before. If you're a fan of Susan Boyle's cover, you'll probably hate this one. And despite what I may feel about Crowe as a human being, he takes his job seriously and his intensity helps his performance past his less-than-perfect vocals in the role of the relentless Detective Javert. Following in the footsteps of Robert Pattinson and Andrew Garfield as really creepy Brit boys American girls swoon over, Eddie Redmayne does a fine job with the vocals, though I have no idea how anyone might fall in love-at-first-sight with him. Right behind Seyfried is Samantha Barks, making her screen debut as Eponine after having sung the role in the show's 25th Anniversary Concert. Barks' performance of "On My Own" (possibly the ultimate song about unrequited love ever written) is one of the film's best scenes. Sacha Baron Cohen and Helena Bonham Carter are well cast as the comically villainous inn-keepers, the Thenardiers and gorgeous Aaron Tveit is terrific as the impassioned revolutionary, Enjolras. Daniel Huttlestone (12 at the time of shooting) very nearly steals every scene in which he appears as Gavroche and the ensemble clearly gives their all...

Hooper obviously has a vision and while he has done his best to be true to it, I can't honestly say his vision works for this particular piece. Hooper spends 90% of the film in close-up after close-up after close-up. The few things not shot this way seemed like aborted attempts to convey the scope of Cameron Macintosh's original stage production. On stage, Les Miserables is practically transcendent when you see it for the first time. Even well-done smaller productions can be truly breathtaking. The seemingly endless close-ups were anything but. Danny Cohen's gorgeous cinematography only serves to enhance Eve Stewart's meticulous production design and Paco Delgado's equally detailed costumes, though the new song "Suddenly" (written only so the film could be eligible for a "Best Song" Oscar), does little to add to Schonberg's and Boubil's original show.

The consensus among the group of actors/directors/musical theatre veterans with whom I saw it tonight: Hooper's adaptation of Les Miserables, while not exactly terrible, suffers from a lack of the theatricality which made the show so successful in the first place. While hardly the worst film adaptation of a stage musical (The Wiz, anyone?), the source material would have probably benefited from a less intimate directing style in order to properly relay Jean val Jean's 30+ year saga. **1/2 (Two and a Half Out of Four Stars). If you like movie musicals and have never seen the show (or heard it's many cast recordings), you may enjoy it. If you are a fan of the show, you might want to skip this version.

*In the movie, Wilkinson plays the kindly Bishop who gives Val Jean a new lease on life.

More, anon.
Prospero
Posted by Prospero at 1:26 AM