November Turkey of the Month 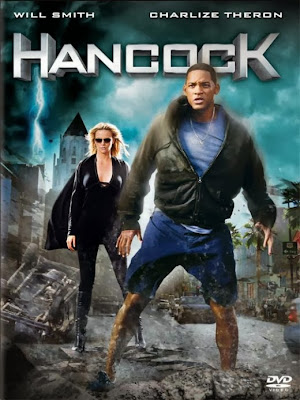 I couldn't let Turkey Month end without a true turkey, could I? Will Smith continues to ride the wave downwards with this 2008 stinker about the most unlikeable superhero, ever. Hancock may pose some interesting questions, but never bothers to answer them and it's hero ends up looking more like a dick, than anything else.

With no memories of his origins and lawsuits against him for the destruction he's caused, Smith's John Hancock is a cypher (if only). After his latest debacle, he his contacted by PR genius Ray Embrey (Jason Bateman),whose wife (Charlize Theron) just happens to be Hancock's immortal partner (or some such nonsense), doomed to immortal super powers (oh, boo-hoo!)

On a side note, no matter how adorable many of us may find Jason Bateman, there is little room in my imagination to allow Ms Theron to be his wife.

"Breaking Bad" creator Vince Gilligan may have come up with the concept for Hancock, but not every idea is a good one. Poorly written and loaded with bad CGI FX, Hancock serves as just another notch on Smith's increasingly large list of bad movies. I was 'lucky' enough to see this movie for free while on a business trip a few years ago. I almost felt guilty about billing it to my expense account. There are rumors of a Hancock 2. It is my fervent hope that they will remain just that.

Given Smith's most recent track record, which includes Wild, Wild West; I Am Legend; Hancock and M.Night Shamalamadingdong's After Earth, I'd say Will needs a new manager. And while I won't go into the rumors about Will and Jada and their supposed sexualities, I will say that Mr.Smith might want to consider going back into the music industry. At the very least, he should teach his son to keep his mouth shut when it comes to education.

In the end, Hancock is a truly terrible movie and certainly deserves the title "Turkey."