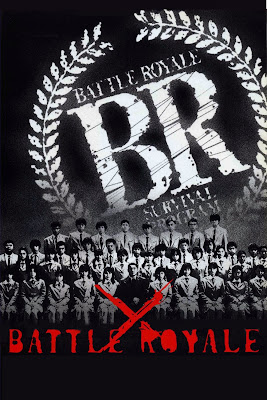 Over the years, several friends and fellow cinephiles have been telling me I had to see Kinji Fukasaku's 2000 Sci-Fi-Action-Splatter mashup, Battle Royale. Obviously an influence on Suzanne Collins' hugely successful YA novel "The Hunger Games" and its sequels, the tale is set in a dystopian future Japan where crime is at an all-time high, committed by bored and dangerous teenagers. The government passes the "BR Act" which calls for a class of 42 ninth-graders to be randomly selected each year and then taken to to a deserted island and made to fight one another to death, until only one is left standing. If by dawn on the third day, more than one is left alive then all are killed via the explosive monitor necklaces around their necks.

They are each given basic supplies and a 'weapon' of some kind, not all of which are particularly useful (a pot lid and a set of binoculars, for example), or are they? Some are much deadlier; sharp and/or explosive. Some kids vow to find a way out without fighting and a few immediately bail and take their own lives. Pacifist Nanahara vows to protect sweet Noriko and they soon make an unlikely alliance with "exchange student" Kawada, who is surprisingly well-versed in all sorts of things, including emergency first-aid, weapons and survival techniques, claiming his father was both a doctor and a sailor. Other alliances form and fall apart and the number quickly dwindles from the original 42. The violence is brutal and unforgiving, though as in many Japanese splatter movies, the blood sprays often seem a bit Pythonesque. And while it's not always easy to judge the acting in a foreign language film, it seemed to me the young cast did a fine job with dialog that often translated quite hilariously, which unsurprisingly is part of what made it work so well. I only hope it's as funny in Japanese as it is in the subtitled version I saw tonight.

While hardly a Turkey, it was also loads of fun to riff MST3K-style with my sweet, Elvin friend Joel* (who I haven't seen in ages and who came down from NYC just to see me and spend time with me today and I love him very much for doing so!), who is one of the people who has been telling me I should see it for 13 years... D'oh!

Hilarious; sick; violent and an undeniable comment on the Human Condition and the power of the survival instinct, Battle Royale is a must-see for my regular readers who haven't done so, yet. I'm just sorry I waited so long. Composer Masamichi Amano brilliantly augments his score with well-known and ironic passages of European Classic music. The effect is often quite stunning.  It was almost immediately apparent why this film is a modern cult classic and I now must seek out it's sequel. ***1/2 (Three and a Half Out of Four Stars).


*I picked Joel up at the Hamilton Train station after working one of my two mandatory Saturdays a year at the Day Job and he accompanied me on a few errands and then home where I made us lunch (Vodka Penne); he tried to convince me to take up Vikram yoga -- Hahahahahahahahahahahahaha! --  and we watched movies on Netflix (thanks for helping me set that up, Sis!). We later ordered Chinese delivery for dinner. When it arrived, the very familiar owner was delivering and he could see the TV. "Oh! You're watching an Asian movie?" he asked, surprised.

I haven't grinned so hardily in several weeks. Thanks again, Joel! Love you! And I promise to be in NYC soon!