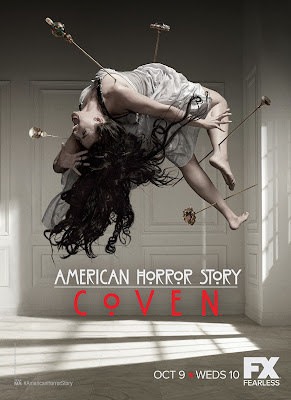 I can't believe that I haven't written about this season's version of "American Horror Story: Coven" before now. Because holy hot hell, this show is on fire (literally) this season.

I suppose because they are the most visible, I should start by talking about the cast. I don't know a director who wouldn't gladly give up a yank of hair or a few drops of blood to work with any and all of the amazing actors who've ever been a part of this show, but this cast in particular is... well, a director's wet dream.

First off, there's the returning ensemble, headed by the astonishing Jessica Lange as the 'Supreme' Salem witch, Fiona and last season's star, Sarah Paulson as her daughter, Cordelia. Season one's burn victim (the highly underrated character actor Denis O'Hare) is back, this time as a cross-dressing, tongueless, necrophiliac version of Riff-Raff along with Taissa Farmiga as Zoe, the obvious 'Supreme-in-Waiting;' Lily Rabe as the Stevie Nicks-obsessed healer Misty; Jamie Brewer as a telepath with Downs; Evan Peters as the Teenage Frankenstein Frat Boy with rage issues and the glorious Frances Conroy in crazy flowing costumes, cat's eye spectacles and a crimped-to-death ginger fright-wig, as Fiona's mortal enemy Myrtle.

As if that wasn't enough, add Academy Award winner Kathy Bates as the most vile woman in the history of New Orleans who has been cursed with eternal life by Voodoo Queen Marie Laveau (Angela Bassett!); Academy Award nominee Gabourey Sidibe as a 'Human Voodoo Doll;' Emma Roberts as a Pyrokenetic; gay imp Leslie Jordan as a member of the coven's High Council and Patti Freakin' Lupone as the holier-than-thou Uber-Christian new neighbor... Every director in Hollywood should be pounding on Ryan Murphy and Brad Falchuck's door, begging on their knees and offering up blood sacrifices to direct an episode of this show.

Of course, the best cast and director in the world mean little if the writing isn't up to snuff. Season One was daring and amazing and creepy and sexy and fairly linear, with glimpses into the past to fill in the gaps while maintaining a fairly singular plot. Season two, on the other hand -- while still amazing -- was a bit all over the place, taking on too many subjects for one story. There was alien abduction; sadistic nuns; demonic possession; Nazi experiments; lesbian empowerment and two serial killers!

'Coven' marks a return to the more focused story line of season one, this time telling the story of an old rivalry between witches forced to move south from Salem and the Voodoo witches who followed, soon after. Fiona is the headmistress of a witch boarding school, run in her long absence by Cordelia. When Zoe (Farmiga) is brought to the school after killing her boyfriend with sex, Fiona returns and all sorts of hell breaks loose. This season's writing team has just amped it up again, giving these incredible actors some powerful scenes and unironic (unless it needs to be) genre dialog.

Which brings me to why this post is titled "Channeling Bruce."

Last week's Halloween episode ended with Cordelia having acid thrown in her eyes at a bar while the school was surrounded by zombies raised by Marie in revenge for the death of the minotaur Bastian.  This week, while Fiona waited at the hospital for word on Cordelia, Zoe stepped up and took control at the school. And as Fiona was wandering the hospital and resurrecting a dead child for another grieving mother, Zoe took up a chainsaw and went nuts on the zombies, channeling Bruce Campbell in his most gloriously blood-covered glee and all I could think was "Zoe went Ash on AHS!" Too much?


Holy crap, I almost forgot about Danny Huston! Keep the brilliance coming, boys! So glad that FX has already announced Season 4!  I can think of a certain East Coast legend they could explore...


If you aren't watching "American Horror Story: Coven," you're missing some truly extraordinary television. Forgive me for repeating myself, but I really want to see what happens when other genres take up AHS' 'repertory' format. And I really can't wait to see what other powerhouse actors show up for Season 4!