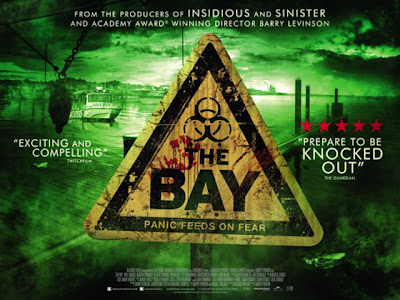 Netflix is a wonder, y'all. Why didn't you tell me about it before? Now I know it's not your fault. I'm not the best at electronics and thankfully sis set up my Wii for me (after having for three years) and now I have the service that put Blockbuster out of business. And because I do, I have seen quite a few movies I'd been reading about but missed their first times around (House of the Devil; VHS - a few others). Tonight, Michael and I watched director Barry Levinson's (Diner; Rainman; Toys) take on the Found Footage Horror genre, The Bay.

Set up like a documentary expose, The Bay tells the tale of a small Maryland town which is hit with an outbreak of a devastating parasites on July Fourth, 2009. Anchored by the account of TV news intern (Kether Donahue) and footage supposedly pieced together from surveillance cameras; cell phone cameras; video recorders; police dash-cams and Skype sessions, Levinson's film is both an indictment of corporate malfeasance and ecological indifference, with plenty of gross-outs along the way. Amidst the the Independence Day celebrations, the people of a small Maryland town along the Chesapeake bay are suddenly struck down by rashes, boils and other horrific symptoms which soon overwhelm the local hospital's ER and have the CDC at a loss.

Unlike most 'Found Footage' films, Levinson doesn't rely on only one or two cameras to tell his story (Michael Wallach's screenplay is based on Levinson's original story), but uses a variety of digital cameras to capture the horrific events, lending an air of veracity often missing from many such movies. The performances from the mostly unknown cast (particularly Stephen Kinken as the confounded but dedicated ER doctor) are effective while the special effects are often quite cringe-worthy (in a good way). Levinson is a truly hit-or-miss director (I'm one of the few who actually likes the underrated Robin Williams fantasy Toys) but I think I have to count The Bay among his hits. Smart, effective and perfectly plausible, The Bay is almost reminiscent of The Ruins in its simple concept and execution. **1/2 (Two and a Half Stars Out of Four)