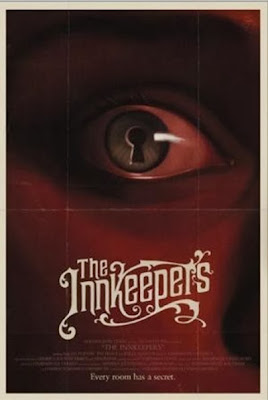 Thanks again to Netflix, I was able to enjoy yet another movie I've been reading about for several years: director Ti West's 2011 haunted hotel movie, The Innkeepers. I recently saw West's debut House of the Devil and found it a bit tedious, but the he has upped his game here, creating compelling characters we actually care about (it may have helped that the young lead reminded me of a very talented young actress I've had the pleasure of directing twice - Yes, Sarah, I mean you!).

It is the last weekend for the soon-to-be-closed Yankee Pedlar Inn leaving Claire (Sarah Paxton) and Luke (Pat Healy) in charge. Luke is a wannabe paranormal investigator who swears he's encountered the hotel's ghost, a woman who supposedly committed suicide after being left at the alter. The only guests are a single woman with her young son and a former TV star turned psychic (Kelly McGillis). As Claire investigates the story of Madeline O'Malley and McGillis warns about going to the basement, the tension rises toward a truly scary ending. Taking cues from The Shining and even The Sentinel, West manages to create a modern ghost story with a kick, using a single location with a likeable and talented cast (which includes an hilarious turn from "Girls" creator, Lena Dunham). I can imagine Dear D squirming in his seat through this one. It certainly got my blood pumping, especially in the third act! *** (Three Out of Four Stars).

Fans of smart, tension-building horror should be quite pleased by The Innkeepers. Rated "R" by the MPAA for bloody images and language.