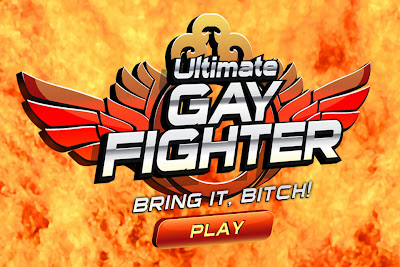 While tonight's post may seem to some that I am just piggy-backing off another blog, which I suppose I might be, I have a few points about that to make before I actually get to  tonight's topics.

First, yes, I look at other sites and blogs for topics. All bloggers do. The trick is to not only give credit to where you found it, but put your own spin on it. Which is exactly what I hope I do. I also suspect that the majority of my readers (readers, not followers) are not regular readers of Towleroad; JoeMyGod;  WickedGayBlog; Kennthinthe212 or JustAJeepguy (links may be NSFW). Regular readers also know I can never pass up almost anything gay and/or hilarious, both of which I think apply here.


First is the demo/intro for a new video game claiming to the be the first gay video game, ever (I doubt that claim, but then I haven't played a video or RP computer game since "Leisure Suit Larry"). And to perfectly honest, having seen the clip I'm about to share, I'm not sure how I feel about "Ultimate Gay Fighter." Part of me wants to say 'Cool' while another part says 'Dude, are you crazy? Promoting stereotypes is so offensive.' One step forward, two steps back, I suppose. PocketGamer makes "UGF," though reviews of the game have been less than positive. Watch the game's trailer and make up your own mind:


Second, I follow The Onion on Facebook and probably would have seen this item there, but saw it on Towleroad first and found it hilariously gay and had to share. The satirical site's movie critic reviews The Hunger Games: Catching Fire with a decidedly 'Cougay' point of view:


Yes, I am a politically liberal gay man who advocates for Marriage Equality and ENDA; governmental transparency and Obamacare.

But I am also a human being who understands the humor in satire and irony. I hate political correctness. Some of the funniest jokes I know are horribly racist; sexist; antisemitic; homophobic or otherwise offensive to some group, somewhere.

Y'all need to get over it, already. To quote Robin Williams: "Joke 'em if they can't take a f*ck!"

I like the article on the Onion that asked the question of why Peeta wasn't hotter. LOL.