The Weirdest Nonsense You'll See This Week, Among Other Things 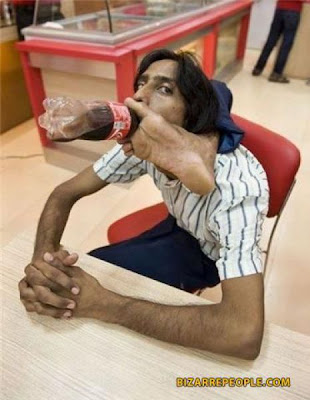 Lots of good things going on this weekend, including the fact that I will be able to audition for a show in which I very much want to take part (my upcoming Day Job trip to the City on the Lake is the same weekend as regular auditions and the producers have graciously agreed to see me early. Yay!) Last night I had a great time at the movies with a friend and while today saw the usual Sunday tasks, none of them were particularly stressful and I got to enjoy plenty of time to decompress. So even though it is the end of the weekend, I'm still in a really good mood.

Of course, there's almost nothing that puts me in a better mood than a bit of good, old-fashioned nonsense. And it just so happens that Jonco, over at Bits And Pieces shared plenty of nonsense today, and I wanted to share some of it with you.

First is something called "Face Folding" The Daily Dot (I've never heard of it, either) says 'Face Folding Turns Every Movie Into a Horror.' Honestly, I'm not sure I agree with that, especially when they use clips from Sci-Fi and Fantasy films and manipulate actors' voices to illustrate their point. The effect is sometimes creepy, but more often just... Extraterrestrial.


And there's this delightfully hilarious bit of editing nonsense that had Uncle P quite literally LOL'ing more than once. Enjoy:


It was the IRL QWOP clip (link has NSFW language) that got me started giggling uncontrollably. The rest was just more fuel for the fire.

In "Only in America" News: The County Fair at the Sonoma-Marin Fairgrounds in Petaluma, California held it's annual World's Ugliest Dog Contest. Beagle/Boxer Winner Walle gets his owner $1500.00 and national TV appearances. I guess it's a good thing that these poor doggies have no idea they're ugly.


Finally, among other things and on an only semi-nonsensical point, if you're a regular then you know the only Reality/Talent show I watch is AGT (a guilty pleasure, to be sure). Well, for the first time in a very long time, I have an early favorite. Kenichi Ebina is a rather amazing dancer and I can see him moving on to the finals (though not sure this early that he can win - no dancers ever have).

Hoping your week stays silly (in the good way, of course). I, for one, will be seeking a shrubbery. A nice one with a path down the middle so you get a lovely two-level effect (ooh - what a give-away!).