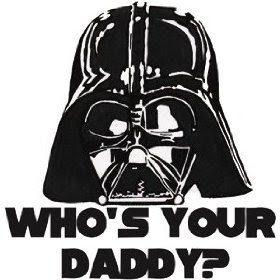 If you met my father or worked with him, you would have thought he was a pretty great guy. Often funny; fairly intelligent; somewhat handy and occasionally a good cook, my dad presented himself as a perfectly decent human being.

Those of us who lived with him, knew better. A racist, anti-Semitic homophobe who was fascinated by Alexander the Great; Napoleon and Hitler, my father was actually quite a jerk. He cheated on my mother (who foolishly took him back after the first time he left her for the woman who gave birth to my half-brother) at least twice that I can confirm. His vacations were spent painting the house or doing other things that excluded the rest of the family and never took us anywhere for more than a day (and even then, only when he had free passes to wherever it was we went). Of course, I didn't realize what a jerk was when I was younger.

Truth be told, as a child, I idolized my dad. As most kids do. I have tons of happy memories spent with my father at the movies; at family cook-outs; on day trips to the Jersey Shore; learning to cook my grandmother's recipes... He instilled in me a love of classical music and certainly informed my sense of humor. He taught me about classic movies and introduced me to the Universal Monsters. He showed me how to build a perfect wood grill fire and attempted to teach me how to drive. He told lots of jokes and taught me accents which I use to this day.

As I got older and reached adolescence, it became clear that my father resented my mother, my sister and I. And although I never officially came out to him, once he realized I was gay, he shut me out completely. He often quoted Thoreau to me: "Most men lead lives of quiet desperation." He complained, "There are men exploring uncharted regions of the world while I am stuck here, paying bills and painting walls." And whose fault was that? As a young adolescent, he repeatedly reminded me that I had an acne problem (his face was heavily scarred from his own, much worse bought with it) and complained because I didn't participate in sports. He absolutely HATED the fact that I discovered Theatre and constantly berated me for not wanting to become a doctor, lawyer or some sort of executive at a boring, soul-crushing corporation.

Don't get me wrong. I loved my Dad. I loved him right up until the day he died from a neuroblastoma at the age of 59 in 1998, less than ten years after he left my mother for the second time and married a trashy, wealthy widow who dragged him to Las Vegas for the last five years of his life. That wedding was one of the unintentionally funniest events I have ever attended, though it's a story for another time. I loved him, but didn't like him very much at all.

Dad died alone, with no one from his real family nearby. Six months before he passed, we had a phone conversation in which he said "I love you" to me for the first time in my memory.

I was camping with my then boyfriend in Provincetown when he passed-away on July 5th, just three weeks shy of his 60th birthday. When Ric and I got home that afternoon, Mom told me he had passed and honestly, I felt nothing. Just like the gal in that number from A Chorus Line. And for the longest time, I felt guilty for feeling nothing. I mean, this was huge. My father had died. I should feel something, shouldn't I?

After several weeks of legal wrangling (impeded by the meddlings of the aforementioned second wife), Dad's ashes were finally sent back East and we buried them along with his father mother in St. Stephan's Cemetery in Trenton, NJ. The ceremony was attended by myself, his sister and exactly five other people (one of whom was the funeral director). It was then that I finally realized that everyone else who had known my father knew what a jerk he was and that they had stayed away in droves. And while I have long ago forgiven him for being such a creep, every Fathers' Day I resent the fact that I don't get to share with everyone else who has or had a really great Dad. And then I realize that given the chance, I would have made a pretty great Dad, having learned so much from having such a jerk for a father.

I know I'm not alone in this. Plenty of folks have absolute monsters for fathers. He never beat us, or stole money to support a drug habit or killed anyone. He worked hard to support, feed and clothe his family. He just wasn't all that into it, I guess.

I hope you have or had a better Dad, than mine. I'd like to imagine that given the opportunity, I would have been a better father than mine was. And I do have to thank my mother, whose kindness, compassion and love of Rock 'N Roll counterbalanced all of his negativity. I have no idea how or why she put up with him as long as she did. Without him, my sister and I wouldn't exist, so I have to give him credit for that, too. Still... I wish I had a Dad I would want to wish a Happy Fathers' Day.

To all of the fathers reading this, please know how much you mean to your children. Love them no matter what. Don't give them reasons to hate or resent you. Make them want to be at your side on your deathbed and give them reasons to mourn your passing. They'll be all the better for it.