My house is Mid-Century Cookie Cutter. Of course, some unusual renovations to the interior by the original owners have left me with some very limited choices when it comes to where and how things fit, particularly in my already small kitchen. Eight years ago, my 25-year-old refrigerator gave up the ghost. Of course, like an aging pet or an elderly relative, the older it got, the more I prepared myself for its eminent demise. When I went to replace it, finding one to fit the space I had wasn't easy and I ended up with a Kenmore which I quickly grew to despise.

The non-adjustable shelves were in a very odd configuration, leaving little space for tall things like pitchers and bottles. The freezer had one wire-rack shelf with too much space between the rungs, making it almost impossible to have a level stack of packages, let alone a stable place for ice cube trays. Within a week of running out of warranty, one of the vegetable crisper drawers partially disintegrated in my hand, rendering it practically useless. The exterior was some kind of textured vinyl, making it almost impossible to keep clean and while the freezer door refused to not swing all the open, the fridge door had to be tapped with a knee to close tightly.

Still, I expected the Effer to last longer than 8 years. Yes, after a slow but steady decline that started with milk-shake-like ice cream two weeks ago ended tonight with me unloading and purging the whole damned thing, filling both my big trash can and my recycling bin to the brim. The thought of lugging them to the curb tomorrow night, along with the yard stuff I managed to get done yesterday, makes me cranky, like a baby with a saggy diaper that leaks. I was able, thanks to a giant cooler and bagged ice, save a lot of the newer produce and dairy. And the chest freezer on the back porch is full, so no one's going hungry anytime, soon. Seems like I just did this last Fall...

A replacement is scheduled to arrive tomorrow. When I finish this post, I will take my vodka out of the freezer and unplug the hellspawn forever. Of course, I fear that when they take it away, they'll forget to take off one of the doors at the dump and a diseased rat will be trapped in it and die. And then a small dog or a raccoon, followed by some form of Belladonna and some baby's blood and it will become an unstoppable demonic machine, devouring anyone in it's path and growing larger and larger with the ingestion of each victim. 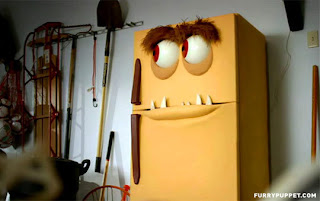 Well, that's just silly, isn't it? No sillier than the nonsense that's been going on around Uncle P's house, lately. I have to check with my electric company (PECO here in southeastern PA) because I may get an energy credit for the new one (the commercial for which is where that goofy monster fridge image comes from).

To quote the great Gilda Radner (look her up!):
"It's always something. If it's not one thing, it's another. Either you smoke or you have a sweatball hanging off of your nose." Seriously, if you don't know this, look it up. Gilda was a comedy genius. Anyway, as much I hate the rigamarole and extra work the Kenmore's death has caused me, I will be very happy to have a brand-new fridge when I get home from the Day Job, tomorrow. I know there is a Robot Hell, but is there an Appliance Hell? I hope so. And I hope that horrible old Kenmore fridge rots there, writhing in imaginary anthropomorphized pain for all eternity. That is of course, until that first rat...

Sorry. I'm in a mood. What are you trying to do, make me sick? Goodnight my little Roseanne Rosannadannas! I hope you clicked those links!