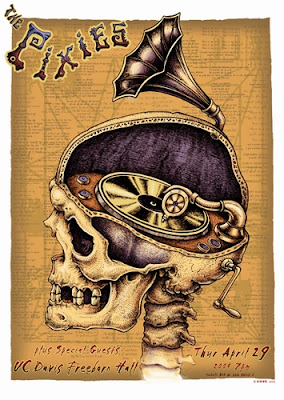 Another quickie music post. The Pixies have a new album out and a new video for their single 'Bagboy.' Both are exceptionally weird and wonderful. Alt music fans have been loving these guys since the mid-80's and there's a reason they're still around. Yes, the song is very weird, but it's still oddly compelling.

And while Industrial Rockers Nine Inch Nails may well have an Oscar-winning frontman, the video for their new single, 'Came Back Haunted' is directed by none other than David Lynch and comes with a warning for photosensitive epileptics. Lynch's films range from absurdist philosophy (Eraserhead; Lost Highway) to haunting drama (The Elephant Man). I'd want him to direct my music video, too.

And finally, proof that most Str8 boys are just a six-pack* away from being gay. These drunken frat boys aren't afraid to do let their disco shine.

*I bet you were expecting this.