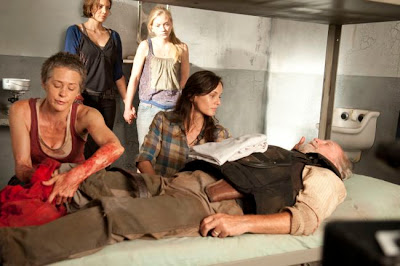 "Sick" picks up right where "Seed" left off as Rick amputates Hershel's lower leg while five surviving prisoners watch, unsure of what's happening. Glenn grabs a wheeled serving table and as the men rush Hershel back to Cell Block 3, the survivors follow them. Led by an obviously unstable Latino with a gun left to him by the guard who locked them in the cafeteria, the surviving prisoners demand to know what's going on. As Carol and the others try to stop Hershel's bleeding, Rick explains to the five what's happened outside. Eventually, they come to an agreement: the men will share half their food in exchange for Rick and company clearing a cell block for them.

They head out into the prison and Rick explains what needs to be done to kill the Walkers. Of course, as soon as they come upon some, the five go nuts, ignoring Rick's advice. Rick, TBone and Daryl just watch as the men attack the Walkers in all the wrong ways. One of the prisoners, 'Big Tiny,' backs away from the fight, only to be cornered by two Walkers. He takes out one, but another, tearing its hand loose from the handcuffs he wears, manages to bite Tiny on the back before the Latino guy shoots it. While arguing about what to do with Tiny, the Latino attacks him, brutally beating his brains in. Rick and Daryl agree to take the Latino out if he causes any problems.

Meanwhile, Carl shows up with a bag full of medical supplies, telling Lori and Carol that he made his way to the infirmary on his own, taking out two Walkers along the way. When Lori castigates him for going off alone, Carl lips off to her; "Get off my back!" Beth yells at him for talking so disrespectfully to his mother and Carl takes off in a huff. Carol has managed to slow Hershel's bleeding and Glenn handcuffs Hershel to the bed, in case he dies and comes back.

In the prison laundry, Rick throws the keys to the Latino, who balks at opening a set of doors behind which Walkers are growling hungrily. When Rick insists, telling him to open only one door, the Latino opens both and throws a Walker on Rick. Luckily, Daryl takes that Walker out and after they have killed the Walkers, the Latino says "Sorry. He was coming at me." Rick says "Stuff happens" and promptly takes the Latino out with a machete to his head. One of the three remaining prisoners takes off with Rick in pursuit while prisoner Axel begs for his life and his friend Oscar says "I've never begged for my life. Do what you gotta do." The running prisoner ends up in a courtyard full of Walkers and Rick closes the door on him, leaving him to his fate.

Carol and Glenn head out to find a Walker on whom she can practice Cesarian surgery, as she fears Hershel will no longer be able to assist in Lori's birth. Maggie asks for time alone with her father, telling him it's okay to let go. When he stops breathing, Lori administers CPR and Hershel revives, scaring them into thinking he's come back as a Walker.

Rick, TBone and Daryl lead Axel and Oscar to a cleared cell block, telling them that if they so much as smell them near their people, they will will be killed. Rick and company return to Cell Block 3, where Hershel awakes, apparently having survived the amputation. Later, Lori and Rick meet outside where Lori tries to apologize for being a bad wife, while Rick touches her for the first time months, saying "We're all grateful for what you did," in reference to saving Hershel. In the yard, as Carol practices surgery on the Walker she and Glenn killed, someone (or something) watches from afar.

So, what have we learned? Rick is clearly concerned about losing his humanity, though Lori insists that she knows he's still a good man. Quick action on Rick's part may well have saved Hershel from the fever that usually follows a Walker bite. Rick obviously has no problem killing to protect those about whom he cares. Carl is still a willful little brat who thinks his new-found bravado will protect him, while Maggie and Glenn are obviously growing closer. Carol, while stronger than ever, still has some trepidations about her ability to help Lori deliver her baby. But just who (or what) was watching her perform 'surgery' on the Walker?

From the trailer, it seems that next week's episode will focus on Andrea, Michonne and the Governor, who is apparently not a very nice person.