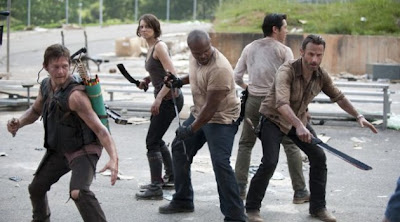 Season 3 of AMC's "The Walking Dead" opens several months after the Seasson 2 finale in which the barn burned down and Hershel's farm was overrun with Walkers. Our intrepid band of survivors enter a home, taking out the Walkers inside and looking for whatever food they can find. Daryl kills and plucks an owl roosting in an upstairs bedroom while Carl finds a few canned items in the kitchen. But before they can enjoy their finds, Walkers move in and the group moves on.

Stopping to reconnoiter, Daryl and Rick head out to hunt ("That owl didn't exactly hit the spot"), finally discovering the prison hinted at in the last episode and Rick formulates a plan. Rick, Glen, Daryl, TBone and Maggie slip inside the outer yard as the others distract the Walkers. Eventually the Walkers in the yard are all destroyed and the group spends the night in the relative safety of the yard, where Hershel suggests they could plant tomatoes, corn and soy beans. Beth and Maggie sing "Parting Glass" around the fire, while Rick formulates a plan to take over the prison as a safe refuge. It soon becomes clear that Rick and the very pregnant Lori have not overcome the problem of her baby's uncertain fatherhood and Carl has not yet forgiven his father for having to 'kill' Shane.

Elsewhere, Michonne (who has yet to be named) sneaks into a pharmacy, killing three Walkers (two with one stroke of her sword) and snatching up a packet of aspirin.

The next day, the group moves into the inner perimeter of the prison, taking out dozens of Walkers in hand-to-hand combat. Several of the Walkers are prison guards in riot gear and have to be taken out under their helmets. When Rick pulls a gas mask off of one them, it's face literally comes off with the mask, leaving a snarling, chomping skull behind. Eventually, they make their way into a cell block that is full of dead bodies, but free or Walkers. The group settles in to the cell block, though Daryl is uncomfortable sleeping in a 'cage' and Carl appears to have a crush on Beth.

Returning to the bar where she has her armless and jawless Walkers confined, Michonne delivers the aspirin to an obviously sick Andrea, who admonishes Michonne for staying to take care of her. We must assume that Andrea has some kind of flu, though it isn't made clear. Michonne asserts "We'll leave in a few days," while Andrea says "If we stay, I'll die."

In the morning, Lori is scared because the baby has stopped moving and worries that it is already dead and may rip its way out. Hershel tries to allay her fears and Rick; Hershel; TBone; Glenn; Daryl and Maggie head deeper into the prison in search of food and an infirmary. Glenn marks their way with spray-paint arrows on the walls. When they encounter a mob of Walkers and attempt to escape, Hershel is bitten on the calf and the group is forced into what appears to be the prison cafeteria. Rick finds no other way to save Hershel than to amputate his leg with an ax.

Michonne and Andrea (and Michonne's 'pet' Walkers) head out from the bar's receiving dock, cautiously making their way through what looks like an abandoned lumber yard.

Back at the prison, where Rick has just cut off Hershel's leg, TBone notices a group of figures behind a chain-link wall, which they assume are Walkers, but who turn out to be several living survivors who are just as surprised to see them.

Filled with loads of zombies, 'Seeds' showed just how callous the group has become about taking out the Walkers. Even the formerly meek Carol and Beth have no problem stabbing Walkers in their heads. I can only imagine that the (as yet) undocumented winter have turned all of them into expert Walker killers and can't wait to find out how Michonne and Andrea have survived. And who are the people still alive in the prison? How have they survived and how will they effect and interact with the central characters? What's wrong with Andrea and how have she and Michonne bonded? And when and how will we meet 'The Governor?'

Here's a look at next week's episode, 'Sick:"